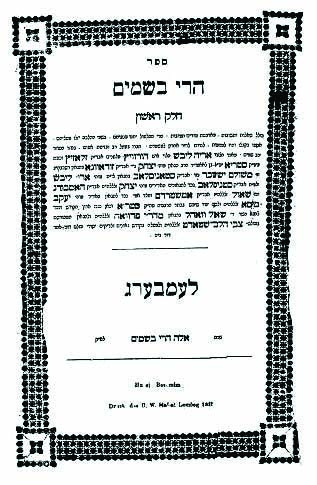 In 2450, Miriam Hanevia was afflicted with tzaraas, according to Seder Olam, after speaking lashon hara about Moshe Rabbeinu. She was quarantined outside of the machaneh for seven days, and only afterward did Klal Yisrael continue its travels. (Bamidbar 12:10)

In 5213/1453, the Muslim conqueror of Constantinople granted equal rights to Jews and other non-Muslims. This created a haven for many Jews who were forced out of Spain during the Spanish Inquisition that took place 39 years later.

When Rav Aryeh was all of 19, some of his chiddushim were published in his father’s sefer, Toldos Yitzchak.

At the age of 24, he was appointed Rav of Zalazowitz, where he wrote many halachic teshuvos, later published in his Harei Besamim.

When he came to ask his grandfather for his haskamah to his sefer, Rav Meshulam Yissachar told him, that unfortunately he had already lost his sight, and he wasn’t zocheh to see his grandson’s rise to greatness.

Rav Aryeh was known not just for his greatness in Torah, but for his greatness in tefillah as well. He would daven with extreme hislahavus, and was also very active in tzedakah and chessed. It is related that once a woman came to him with a chicken, asking about its kashrus. Rav Aryeh immediately saw that the chicken was a treifah, and he would not find any heter to eat it. After rendering his psak, he returned the chicken to her together with a coin, enough to be able to buy a new chicken.

In 5664/1904, Rav Aryeh was appointed Rav of Stanislav, where the previous Rabbanim were his father and grandfather. This was in accordance with the tzavaah of his grandfather that only his descendants serve there as Rav.

Rav Aryeh suffered much during his life, as he writes in his introduction to his sefer; some of his children were niftar in his lifetime, R”l, and he faced other tribulations.

In 1783, the Montgolfier brothers first publicly demonstrated their hot-air balloon (which did not carry any passengers) over Annonay, France.

In 1812, the Louisiana Territory was renamed the Missouri Territory, to avoid confusion with the recently admitted state of Louisiana.

In 1919, Congress approved the 19th Amendment to the U.S. Constitution, guaranteeing citizens the right to vote regardless of their gender, and sent it to the states for ratification.

In 1939, the German ocean liner MS St. Louis, carrying more than 900 Jewish refugees from Germany, was turned away from the Florida coast by U.S. officials.