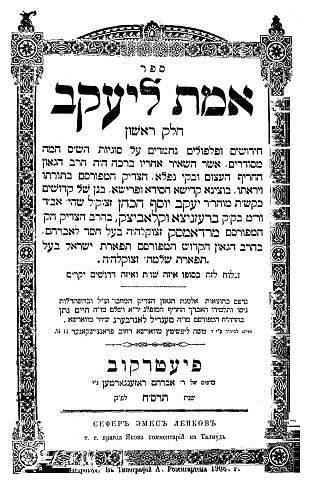 In 2449/1312 B.C.E., Bnei Yisrael received double portions of mann on Friday; Moshe Rabbeinu informed them of the holiness of the Shabbos (Shemos 16:22).

In 5709/1949, Kfar Chabad, a village located five miles south of Tel Aviv, was founded by the Lubavitcher Rebbe, Harav Yosef Yitzchak, zt”l. The first settlers were mostly recent immigrants from the Soviet Union, survivors of the terrors of World War II and Stalinist oppression.

Reb Yaakov Yosef was an oved Hashem of stature. Despite obstacles, he served Hashem with mesirus nefesh. In his short life he served as Rav in two towns, Breznitza and Klobitzk.

The Knesses Yechezkel, zy”a, wrote a lengthy hakdamah in the sefer Emes L’Yaakov about his great brother’s mesirus nefesh for Torah and kedushah. He goes on to write how beloved he was in the eyes of all the Gedolei Hador and how much they cherished him. Tzaddikim attested that he did not derive any pleasure from this world.

Unfortunately, as mentioned, Reb Yaakov Yosef was not maarich yamim; he was niftar at the age of 29. His chiddushei Torah are printed in Emes L’Yaakov.

In 1940, the Nazis occupied Brussels, Belgium, during World War II.

In 1954, a unanimous U.S. Supreme Court handed down its Brown v. Board of Education of Topeka decision which held that racially segregated public schools were inherently unequal, and therefore unconstitutional.