This Day In History 2 Elul/September 5

In 5315/1555, the pope ordered the confiscation and burning of all copies of the Talmud.

The first printing of the Shulchan Aruch took place near Tzfas in Eretz Yisrael. 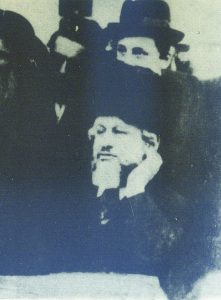 Harav Avraham Yaakov Friedman was born on 24 Nisan 5644/1884 in Boyan. He was the third son of Harav Yitzchak of Boyan, the Pachad Yitzchak.

Reb Avraham Yaakov married the youngest daughter of Harav Mordechai Twersky of Loyev. They didn’t have any children.

Following the petirah of his father, on 16 Adar 5677/1917, Reb Avraham Yaakov was appointed Rebbe. (His three brothers also became Rebbes, each in a different city.) He held court in Lvov (Lemberg), and many of the Ruzhiner Chassidim who lived in Galicia traveled to his court.

Reb Avraham Yaakov was noted for his greatness in Torah. Unlike most of the other Ruzhiner Rebbes, he would deliver divrei Torah every Shabbos and Yom Tov.

Reb Avraham Yaakov loved Eretz Yisrael; every Chassid who went there gave him much simchah. In 5692/1932, he himself visited Eretz Yisrael. On Lag BaOmer that year he was honored with the lighting of the main hadlakah at the kever of the Rashbi in Meron, the right to which was purchased from the Jews of Tzfas by his ancestor the Ruzhiner Rebbe, zy”a, and had been inherited by his father, the first Boyaner Rebbe, zy”a.”

During World War II, when the Nazis conquered Poland and Western Galicia, the Russians took Eastern Galicia and the Vilna region. When they entered Lvov, they dealt with it as Soviet territory.

From then on, Reb Avraham Yaakov was forced to work. He took the job of insurance broker. Another Rebbe who also worked as a broker was Harav Yisrael Shapira, zt”l, the Bluzhever Rebbe.

When the Germans overran Lvov, they began the systematic murder of all the Jews. During one of these selections, the Rebbe was found, together with his Rebbetzin, and killed al Kiddush Hashem. It was 2 Elul 5702/1942.

In 1774, the first Continental Congress assembled in Philadelphia.

In 1836, Sam Houston was elected president of the Republic of Texas.

In 1882, the nation’s first Labor Day was celebrated with a parade in New York. (Although Labor Day now takes place on the first Monday of September, this initial celebration occurred on a Tuesday.)

In 1939, four days after war had broken out in Europe, President Franklin D. Roosevelt issued a proclamation declaring U.S. neutrality in the conflict.