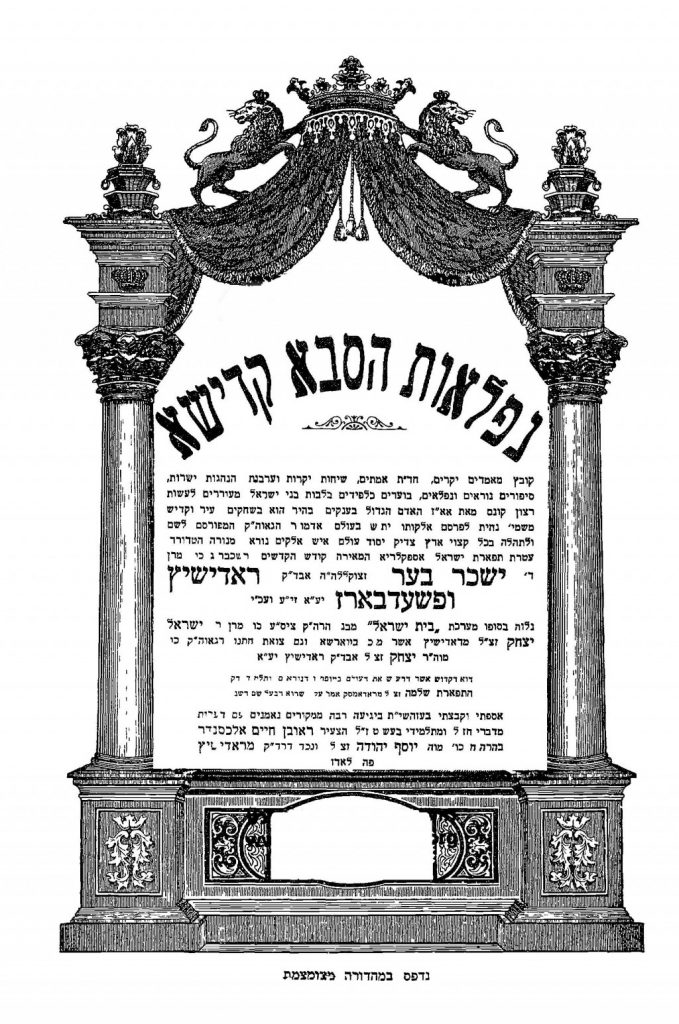 Harav Yissachar Dov Ber of Radoshitz (Radoszyce) was born in 5525/1765. His father, Harav Yitzchak, was renowned for his profound yiras Shamayim (as mentioned on his matzeivah). Reb Yitzchak served as a meshamesh to the Maggid of Mezeritch, who made Reb Yitzchak’s shidduch with the sister of Harav Zundel, Rav of Radoshitz. The Maggid promised them a son who would enlighten the entire world. Reb Yitzchak’s brother-in-law, Harav Zundel, used to take young Yissachar Dov to Lizhensk to the Rebbe Reb Elimelech.

From a very young age, Yissachar Dov was known for his perishus and sensitivity to kedushah. At age seven, he would immerse in the mikveh every morning, even in the winter when it was necessary to break through the ice of the frozen river and then immerse in freezing water.

After his marriage, Rav Yissachar Dov settled in Chanshin and served as Rav. The impoverished community was unable to support him, so he tried his hand at peddling. This caused him great anxiety because he was forced to take too much time away from learning. He moved to Chmielnik, but the situation there was no better. He moved on to Radoshitz to succeed his recently deceased uncle, Harav Zundel, as Rav.

Under the influence of his uncle, Rav Yissachar Dov had traveled to many of the generation’s leading Rebbes, visiting their courts regularly. These trips were undertaken with mesirus nefesh, leaving his house barren and his shelves empty. Rav Yissachar Dov refused, however, to accept the many offers he received to help support his household. He traveled to 120 Rebbes and other Torah leaders of his day.

His Rav muvhak was the Chozeh of Lublin. He was also a Chassid of Harav Moshe Leib of Sassov, Harav Menachem Mendel of Rimanov and the Kozhnitzer Maggid. He was a close talmid of Harav Yaakov Yitzchak, the Yehudi Hakadosh of Peshischa.

In 5575/1815, after the petirah of his Rebbes the Chozeh and the Yehudi Hakadosh, Rav Yissachar Dov chose to follow Harav Avraham Yehoshua Heschel, the Ohev Yisrael of Apta.

On Erev Shabbos Parashas Behaalos’cha, 18 Sivan 5603/1843, Reb Yissachar Dov was niftar. He was buried in Radoshitz, where his kever was frequented often, especially on the day of his yahrtzeit, until the War. It was known as a place where one could daven for yeshuos.

Many of Reb Yissachar Dov’s divrei Torah are found in the sefarim Niflaos Hasaba Kadisha and Dibros Chaim.

In 1776, Virginia’s colonial legislature adopted a Declaration of Rights.

In 1897, Carl Elsener patented his penknife. The object later became known as the Swiss army knife.

In 1942, Anne Frank, a German-born Jewish girl living in Amsterdam, received a diary for her 13th birthday, less than a month before she and her family went into hiding from the Nazis.

In 1987, President Ronald Reagan, during a visit to the divided German city of Berlin, exhorted Soviet leader Mikhail S. Gorbachev to “tear down this wall.”