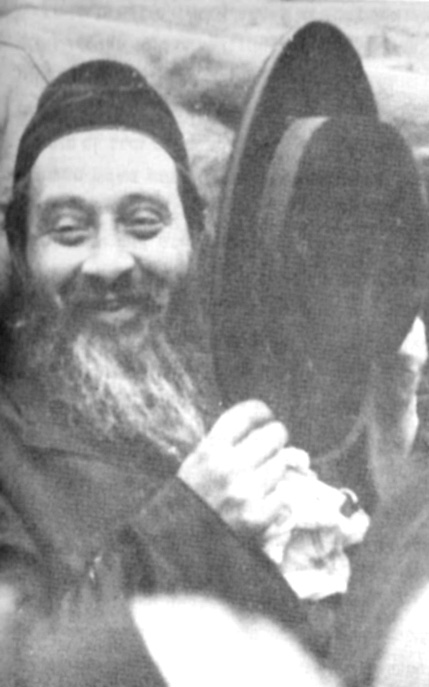 In 5689/1929, Arabs rampaged throughout Eretz Yisrael, killing 133 Jews and injuring and maiming hundreds of others, most of them in a massacre in Yeshivas Chevron. Hy”d. They also burned down many homes, and burned and damaged sifrei Torah and tashmishei kedushah. The remaining Jews fled to Yerushalayim.

Harav Shlomo Chanoch was born in 5652/1892. His father was Harav Yechezkel, zy”a, the Knesses Yechezkel of Radomsk.

During his early years he was primarily a talmid of Harav Efraim Tzvi Einhorn, zt”l, Rav of Amstov.

After marrying his cousin, the daughter of Harav Moshe Elimelech, son of the Chessed L’Avraham, zy”a, he supported himself through trade, in which he was extremely successful.

His father, the Knesses Yechezkel, was niftar in 5671/1911, leaving Rav Shlomo Chanoch to assume leadership of the thriving Chassidus when he was only 29 years old.

After WWI, which the Rebbe spent in Germany, he moved to Sosnowiecz, where he continued leading his Chassidim until WWII.

Beginning in 5687/1927, the Rebbe founded many yeshivos, popularly known as the Yeshiva Kesser Torah network, in which young Chassidim achieved high levels of Torah and avodas Hashem under the Rebbe’s stellar leadership.

The yeshivos were headed by his only son-in-law, Harav Moshe Dovid Rabinowitz, Hy”d, (who was also his first cousin). Harav Moshe Dovid, like his father-in-law, was strikingly humble. He administered the curriculum, hired Roshei Yeshivah of stature, and ensured that life in the yeshivos flowed smoothly.

Before WWII broke out, there were over 40 Radomsker yeshivos scattered throughout Poland and Galicia.

The Rebbe himself financed the yeshivos, and kept the Chassidus and his yeshivos far from the limelight.

When WWII broke out, the Rebbe was in Krenitz, near the Carpathian Mountains, for health reasons. Returning to Poland, he arrived in Lodz and refused to escape despite being offered the opportunity.

On Chanukah of 5700/1940, the Rebbe was transferred to the Warsaw Ghetto, where he continued to conduct tischen and lead Chassidim in the direst of conditions. Again, the Rebbe refused to leave his Chassidim, choosing to remain with his flock until the very end.

On 18 Av, a brigade of Nazis broke into the building at Novolifki 30 and killed 150 people, among them the Rebbe, his Rebbetzin, his daughter, and his son-in-law, Reb Moshe’le. He was brought to kevurah in the Warsaw cemetery. The kever was rebuilt in 5747/1987 by Harav Yechezkel Besser, z”l.

Some of his divrei Torah were published in Birkas Shlomo, a sefer that includes chiddushim of his son-in-law.

In 1956, President Dwight D. Eisenhower signed a measure making “In G-d We Trust” the national motto, replacing “E Pluribus Unum” (“Out of many, one).

In 1965, President Lyndon B. Johnson signed a measure creating Medicare, which began operating the following year.

In 2001, Robert Mueller, President George W. Bush’s choice to head the FBI, promised the Senate Judiciary Committee that if confirmed, he would move forcefully to fix problems at the agency. (Mueller became FBI director on Sept. 4, 2001, a week before the 9/11 attacks.)