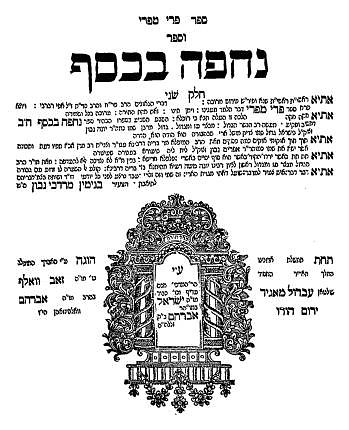 In 5701/1941, a torpedo, apparently fired accidentally by a Soviet submarine, sank the Struma, a cattle boat in which 769 Romanian Jews were attempting to flee to Eretz Yisrael during WWII. The ship was badly overcrowded and lacked basic necessities; even its engine barely worked. The trip’s organizers misled the passengers, and upon reaching Istanbul, they discovered they did not have the visas they had been promised that would permit them to enter Eretz Yisrael. The Turkish government first quarantined the ship and its passengers, and later forced it into open water, which led to its sinking. Only one person survived. Hashem yinkom damam.

Harav Yonah Navon was born in 5473/1713 in Yerushalayim. His father, Harav Chanoun, zt”l, was one of the Gedolei Yerushalayim and a Dayan in the city.

Rav Yonah toiled in Torah all his life, despite the dire poverty in which he and his family lived.

As a bachur, he learned in Beis Medrash Beit Yaakov under Harav Yisrael Meir Mizrachi, zt”l, the author of Pri Ha’aretz, who wrote of him, “A talmid who enlightens his Rebbi.”

At the age of nineteen, he was appointed Rosh Yeshivah of Yeshivat Gedulat Mordechai, founded and supported by the nagid Rav Mordechai Taaluk. He also taught in Yeshivat Yefaer Anavim.

However, Rav Yonah still didn’t make ends meet, so he was forced to leave Eretz Yisrael for Italy. There he found members of his father’s family who gladly supported him. Thus, Rav Yonah was enabled to publish his sefer Nechpah Bakessef, his halachic responsa.

In his Shem Hagedolim, the Chida writes of Rav Yonah, “My teacher Rav Yonah … there was nearly no posek like him in our region … a chassid and a mekubal. Due to the sins of the generation, he was plucked from our midst at the age of forty-seven.”

In 1771, the Falkland Islands were ceded to Britain by Spain.

In 1917, President Woodrow Wilson, in an address to Congress, pleaded for an end to the war in Europe, calling for “peace without victory.” (By April, however, America also was at war.)

In 1973, former president Lyndon B. Johnson died at his Texas ranch at age 64.

In 1997, the Senate confirmed Madeleine Albright as the nation’s first female secretary of state.

In 1998, Theodore Kaczynski pleaded guilty in Sacramento, California, to being the Unabomber, responsible for three deaths and 29 injuries, in return for a sentence of life in prison without parole.