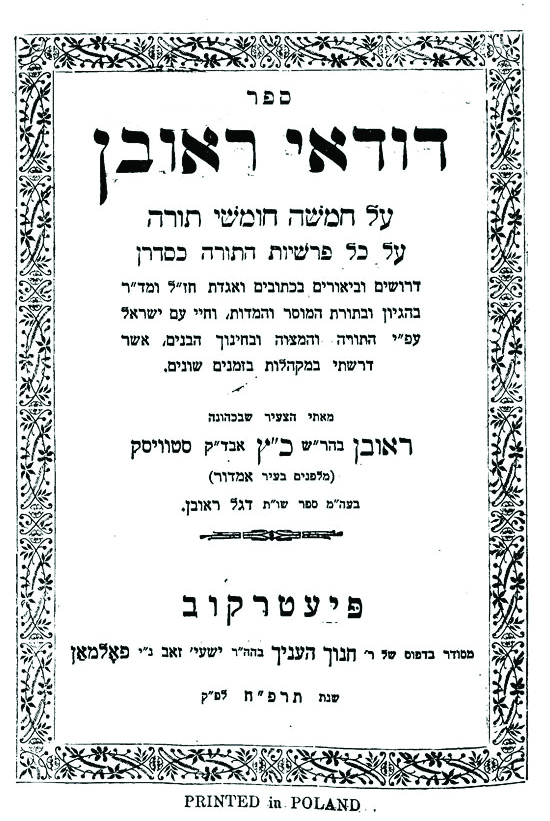 In 5710/1949, Operation Magic Carpet, to bring Yemenite Jews to Israel, began. Most were forced to abandon their parents’ mesorah and were brainwashed into living a secular lifestyle.

Harav Reuven Hakohen Katz was born in Olshany, in the Vilna region, on Rosh Chodesh Iyar 5640/1880. His father was Rav Shimon. At about age 11, he was already fluent in masechtos Shabbos and Bava Kama, and was known as the iluy of Olshany. His bar mitzvah drashah, delivered when he was a talmid at the yeshivah of Ivye, astounded the local talmidei chachamim.

From Ivye he moved on to Mir, and when he was 15, he was accepted into the yeshivah of the Chofetz Chaim in Radin. After about a year, he transferred to Yeshivas Knesses Yisrael in Slabodka.

In 5657/1897, he was among the initial 14 bachurim of the yeshivah of Slutsk, founded by Harav Isser Zalman Meltzer.

In 5663/1903, Reb Reuven moved to Vilna, where Harav Avraham Yitzchak, the Rav of Gicialaukia, chose him as a son-in-law. While living in his father-in-law’s house, he became thoroughly fluent in halachah, and was given semichah by the leading Gedolim of the generation.

His first rabbinate was in the town of Sulevo in the Minsk region; in 5669/1909, he was appointed Rav of Amdur (Indura) where he remained for 14 years.

In 5682/1922, Reb Reuven published his first sefer, She’eilos U’teshuvos Degel Reuven, in which he demonstrated his expertise in all areas of halachah. A short while later he was invited to serve as Rav in Stawiski in the Lomza region.

Wherever he lived, he established yeshivos for the bachurim and shiurim in the batei medrash. He was active in the Vaad Hayeshivos, founded by Harav Chaim Ozer Grodzensky, zt”l, of Vilna.

In 5685/1925, his second sefer was published. It was called Duda’ei Reuven, and contained his chiddushim on Bereishis and Shemos.

When Reb Reuven received a request in 5692/1932 to serve as Rav in Petach Tikvah, he moved to Eretz Yisrael, fulfilling a lifelong dream.

Rav Reuven disseminated Torah to his talmidim all his years. He toiled to raise the level and character of his talmidim.

In 5700/1940, he published the second volume of Degel Reuven, which includes several teshuvos regarding halachos that relate to Eretz Yisrael, such as the application of orlah, leket, shichechah and pe’ah in modern times. He published the third volume of this work nine years later.

In 5714/1954, he published the second volume of Duda’ei Reuven, with chiddushim and drashos on Vayikra, Bamidbar and Devarim.

In 1800, Congress held its first session in the partially completed U.S. Capitol building.

In 1904, the first underwater submarine journey was taken, from Southampton, England, to the Isle of Wight.