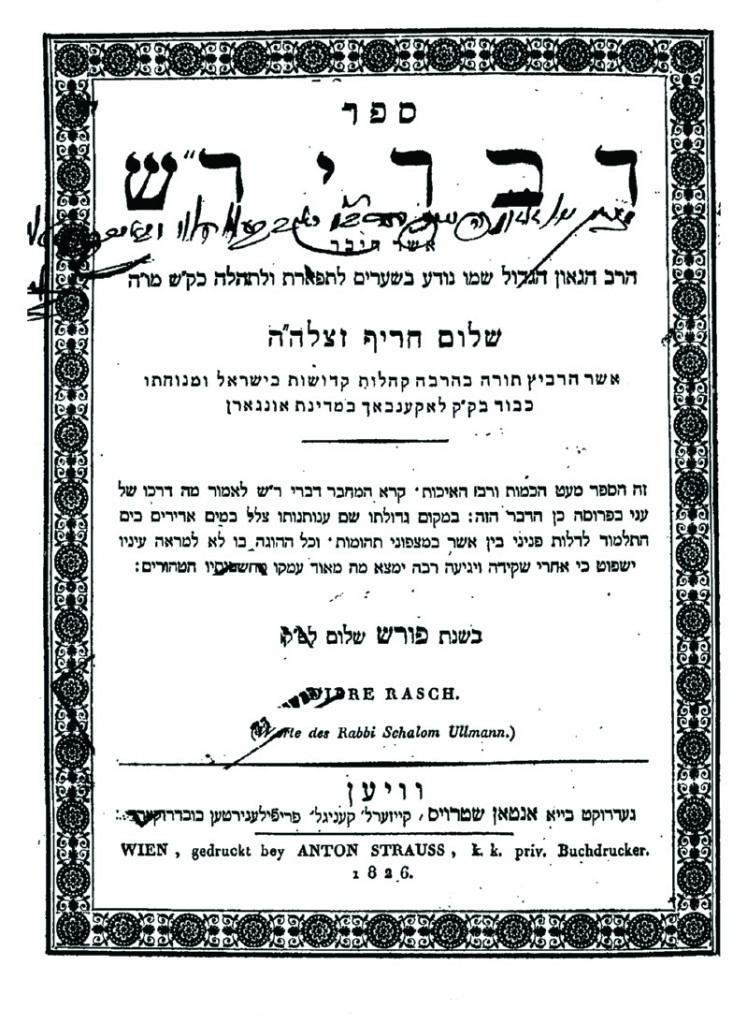 In 3390/371 B.C.E., King Koresh of Persia granted the Jews permission to rebuild the Second Beis Hamikdash. This day was therefore declared a Yom Tov, as cited in Megillas Taanis.

In 3802/42, King Agrippa I began the reconstruction of the chomah of Yerushalayim.

In 4178/418, a decree that Jews were to be excluded from public offices in the Roman Empire went into effect.

In 5608/1848, the pillars of the ghetto of Ferrara, Italy, were destroyed by the professors and students of the Athenaeum.

In 5657/1897, Yeshivas Rabbeinu Yitzchak Elchanan, the first yeshivah in the United States, was incorporated.

Harav Shalom Ulman was born in Fiorda on 16 Adar 5515/1755. His father, Harav Yisrael Isser, was the mechutan of Harav Yosef Steinhart, Rav of Fiorda.

He corresponded with some of the generation’s leading Gedolim, among them Harav Aryeh Leib Ginzburg, the Shaagas Aryeh.

Reb Shalom married the daughter of Harav Refael Reiss, Rav of Edingen in Switzerland. In 5544/1784 he was appointed Rav of Ansbach, and in 5552/1792 Rav of Stampfen; he became Rav of Nad-Attad in 5559/1799, and 10 years later, in 5569/1809, Rav of Lakenbach. Harav Mordechai Bannet, Rav of Nikolsburg, would send many of his excellent talmidim to learn under Reb Shalom in Lakenbach.

Famed in the Torah world for his sharp mind and thorough knowledge of both nigleh and nistar, Reb Shalom was aptly called Reb Shalom Charif.

Reb Shalom wrote many sefarim, but only his Divrei Rosh on the Torah and Shas was published.

Towards the end of his life, Reb Shalom said that he knew when he was going to be niftar. In his later years he barely spoke at all.

Four weeks before his petirah, in a letter to his son, Reb Shalom signed off saying that he was writing briefly, as he was preparing for his judgment. On 16 Adar 5585/1825, 70 years to the day since he was born, Reb Shalom was niftar.

In 1913, King George I of Greece was assassinated in Thessaloniki.

In 1940, Adolf Hitler and Benito Mussolini met at the Brenner Pass, where the Italian dictator agreed to join Germany’s war against France and Britain.

In 1962, France and Algerian rebels signed the Evian Accords, a cease-fire agreement that took effect the next day, ending the Algerian War.

In 1963, the U.S. Supreme Court, in Gideon v. Wainwright, ruled unanimously that state courts were required to provide legal counsel to criminal defendants who could not afford to hire an attorney on their own.

In 1965, the first spacewalk took place as Soviet cosmonaut Alexei Leonov went outside his Voskhod 2 capsule, secured by a tether.

In 1974, most of the Arab oil-producing nations ended their 5-month-old embargo against the United States that had been sparked by American support for Israel in the Yom Kippur War.

In 1990, thieves made off with 13 works of art from the Isabella Stewart Gardner Museum in Boston (the crime remains unsolved).