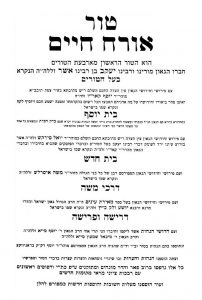 Rabbeinu Yaakov Baal Haturim, the third son, was born in Cologne, Germany, about 5030/1270.

In 5063/1303 the Rosh fled Germany because of persecution and harassment following the arrest of his Rebbi, the Maharam of Rothenberg. Accompanied by his son, Rabbeinu Yaakov, he arrived first in Barcelona, but subsequently settled in Toledo. Rabbeinu Yaakov stood by his father, and received from him most of his vast Torah knowledge.

Rabbeinu Yaakov suffered much travail in his life. Deprivation, poverty, and destitution were his daily lot. He attempted to earn a living through trade, but failed. Nevertheless, despite his suffering, he served Hashem with utmost simchah and devotion.

Rabbeinu Yaakov’s work, the Four Turim, served as the basis of what would become the Shulchan Aruch. Rabbeinu Yosef Karo later authored Beis Yosef on the Turim, elucidating the Tur and bringing all the sources used by the Tur in his work. At times the Beis Yosef differs with the Tur in psak halachah. Many other giants authored chibburim on the Tur, such as Rema (Darchei Moshe), the Bach, and the Sm”a (Drishah u’Perishah).

The Tur was reprinted hundreds of times through the generations, and has in recent years been produced in an elegant new version, incorporating many corrections of errors that seeped in over the years.

The Shem Hagedolim in Erech Turim writes that due to the infinite holiness of the Baal Haturim he was zocheh that in all succeeding generations a Rav cannot lift a hand in halachah without the Turim!

In addition, the Baal Haturim authored a peirush on the Torah, known as Peirush Hatur He’aruch, which encompasses a thorough bei’ur, similar to those of many other Rishonim. The gematrios and taamei hamesorah that accompanied that peirush are printed in many Chumashim under the name Baal Haturim.

Later in life Rabbeinu Yaakov wished to settle in Eretz Yisrael, and he set out on his journey to the Holy Land. But as he arrived in the city of Kio, near Izmir, Turkey, he became ill; he was niftar on 12 Tammuz. Carried back to Toledo, he was buried near his father.

In 5151/1391, his wife and his daughter, who was the wife of his brother Rabbeinu Yehudah, killed themselves al kiddush Hashem during the massacres in Toledo, in which the entire Jewish population either converted or was killed.

In 1868, Congress passed an Omnibus Act allowing for the readmission of Florida, Alabama, Louisiana, Georgia, North Carolina and South Carolina to the Union.

In 1876, Lt. Col. Colonel George A. Custer and his 7th Cavalry were wiped out by Sioux and Cheyenne Indians in the Battle of the Little Bighorn in Montana.

In 1981, the U.S. Supreme Court ruled that male-only draft registration was constitutional.