This Day In History 11 Kislev/November 29 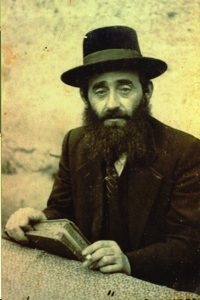 Harav Tzvi Hersch Friedman, zt”l, was born in Beregsazs, Hungary in 5655/1895. Following his marriage, he moved to the nearby city of Munkacs.

In the early 1930s, Reb Herschel founded Yeshivas Nachlas Tzvi for young bachurim, which prepared them to learn in the famed Munkatcher Yeshiva, headed at the time by the Minchas Elazar, zy”a. Reb Herschel’s main focus was to teach the talmidim how to learn a blatt Gemara on their own and to understand each sugya. However, he also put strong emphasis on middos tovos and yiras Shamayim.

Many of Reb Herschel’s chiddushim on sugyos haShas were lost during the Holocaust. However, upon arriving in America after World War II, Reb Herschel was determined to save at least some of his divrei Torah from being forgotten. He wanted to have the opportunity to instill Torah and yiras Shamayim into the next generation, and was indeed successful in publishing his new chiddushim al haTorah in his sefer Chemdas Tzvi.

For many years, he would give a daily shiur in the Shomer Shabbos shul of Boro Park. This shiur was established for baalei batim who had the fire of Torah burning within them; they called themselves “Chevrah Lomdei Torah B’Rabbim.” In three hours they would cover a blatt Gemara, Chumash/Rashi, Midrash and Shulchan Aruch.

Reb Herschel was also known for the unique niggunim that he composed. They have inspired many people, including Gedolei Yisrael. It is told that the Satmar Rebbe, zy”a, would particularly enjoy singing Reb Herschel’s niggunim, and that for many years he would sing one of them for the Naanu’im on Sukkos. Reb Herschel’s niggunim are still sung today at many Rebbishe tischen.

In 1892, a patent was issued to Almon Brown Strowger for the rotary dial.

In 1929, the first airplane flight over the South Pole was made by U.S. Navy Lt. Comdr. Richard E. Byrd.

In 1947, the U.N. General Assembly passed a resolution calling for the partitioning of Palestine between Arabs and Jews; 33 members, including the United States, voted in favor of the resolution, 13 voted against, while 10 abstained. (The plan, rejected by the Arabs, was never implemented.)

In 1975, Bill Gates adopted the name Microsoft for the company he and Paul Allen had formed to write the BASIC computer language for the Altair.