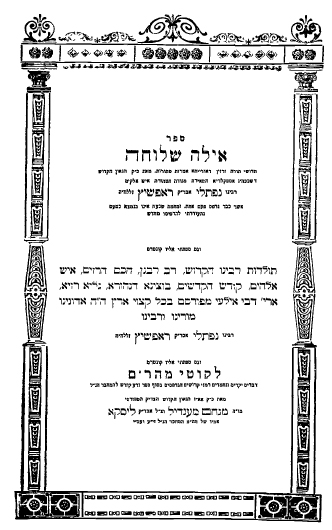 In 5708/1948, the Syrian army, which had advanced to Deganya, was miraculously halted and repulsed.

On the day that the Baal Shem Tov was nistalek, the first day of Shavuos 5520/1760, a son was born to Reb Menachem Mendel of Linsk and Rebbetzin Baila, daughter of Harav Yitzchok Horowitz, known as Reb Itzikel Hamburger, zt”l. He was named Naftali Tzvi. Reb Naftali studied in the yeshivah of his uncle, Reb Meshulam Igra, zt”l.

For his initial donning of tefillin his father took him to Harav Yechiel Mechel of Zlotchov, zy”a. Later, Reb Naftali would relate that as Rav Yechiel Mechel fitted the tefillin, he connected him to a higher spiritual world from which he never detached himself.

When Rav Naftali was about 20 years old he traveled to Lizhensk to visit the Rebbe Harav Elimelech, zy”a. Rav Elimelech, however, would not receive him, stating that he was not interested in talmidim with yichus; he relented only after intense pleading by Rav Naftali, who quickly became Rav Elimelech’s dedicated disciple.

After the latter’s petirah he followed the Chozeh of Lublin, the Maggid of Kozhnitz and Harav Menachem Mendel of Rimanov, zechusam yagein aleinu.

After the petirah of his Rebbes, many Chassidim chose Rav Naftali as their Rebbe. Ropshitz turned into a focal point for thousands of Chassidim of the entire Galician countryside (then under Austrian rule).

The Rebbe was known for his profound wisdom and humility.

Ropshitz Chassidus was known for its meticulous adherence to minhagim, heartfelt tefillos and captivating niggunim.

During the Napoleonic wars many tzaddikim, including Rav Mendel of Rimanov, strongly supported Napoleon. But Rav Naftali, as well as the Baal Hatanya, zy”a, were strongly opposed to him, sensing that victory for Napoleon would introduce changes which would threaten the Jewish way of life.

His sons were Harav Avraham Chaim of Linsk, Harav Yaakov of Melitz and Harav Eliezer of Dzikov, and his son-in-law was Harav Asher Yeshaya of Ropshitz, zechusam yagein aleinu. His sefarim are Zera Kodesh, Ayala Shelucha and Imrei Shefer. Ohel Naftali discusses the genealogy of this great tzaddik.

In 1607, English colonists went ashore at present-day Cape Henry, Virginia, on an expedition to establish the first permanent English settlement in the Western Hemisphere.

In 1921, weather reports were broadcast for the first time in St. Louis, Missouri.

In 1986, an explosion and fire at the Chernobyl nuclear power plant in Ukraine caused radioactive fallout to begin spewing into the atmosphere. (Dozens of people were killed in the immediate aftermath of the disaster while the long-term death toll from radiation poisoning is believed to number in the thousands.)