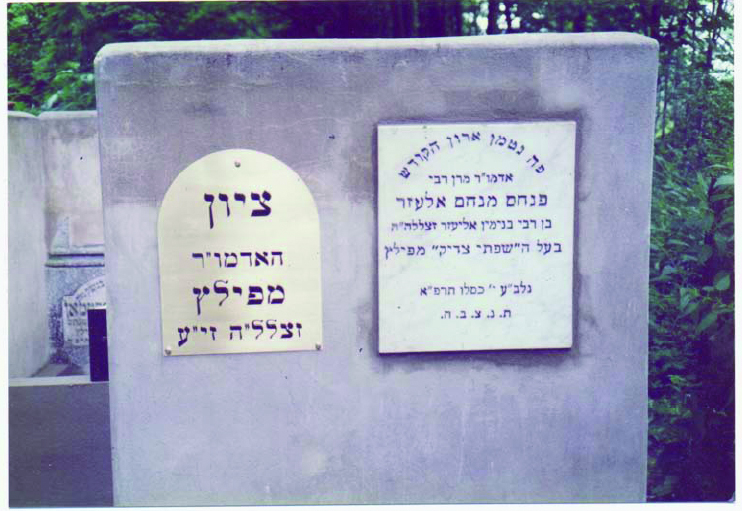 In 5587/1826, Harav Dov Ber of Lubavitch, the Mitteler Rebbe, was released from prison. The date is celebrated among Lubavitcher Chassidim as a “festival of liberation.”

Harav Pinchas Menachem Elazar Justman, the Sifsei Tzaddik, was born to his father, Rav Binyamin Eliezer, and his mother, Rebbetzin Tzina Pessa, the daughter of the Chiddushei Harim, zy”a, in 5608/1848.

Because his mother was niftar when he was quite young, he grew up in the home of his grandfather the Chiddushei Harim, together with his cousin, also an orphan — and later his brother-in-law — the Sfas Emes, zy”a.

Already at the age of seven, young Pinchas Menachem was outstanding in both his learning and the middah of kedushah, walking in the streets with his eyes closed.

In 5624/1864, Rav Pinchas Menachem married his first cousin, Hendel Leah, who was the daughter of Harav Avraham Mordechai, zt”l, the son of the Chiddushei Harim, becoming the brother-in-law of the Sfas Emes.

After the petirah of the Chiddushei Harim in 5626/1866, the chassidim traveled to the Rebbe Harav Henoch of Aleksander, zy”a, and Rav Pinchas Menachem traveled to him as well. When the Rebbe Rav Henoch was niftar after just four years, the leadership was passed on to the Sfas Emes.

Rav Pinchas Menachem was one of the only chassidim who understood the deep shmuessen of the Sfas Emes, and thus after every tisch, many congregated around him to hear him repeat the Rebbe’s words.

He never wanted to lead his own court, until a talmid chacham came and told him that he should let others bask in the light of Torah and yiras Shamayim. (Some say that this was Eliyahu Hanavi.)

The Sifsei Tzaddik stressed many times, both in his sefer and personally to his children and grandchildren, the importance and the significance of learning Torah on Shabbos.

His first zivug, Rebbetzin Hendel Leah, was niftar during his lifetime, and in 5675/1915 he married Chaya Yuta, a granddaughter of the brother of the Chiddushei Harim. In 5679/1919 he moved to Chenstechov, where he resided for the last two years of his life.

The Sifsei Tzaddik was niftar on 10 Kislev in Chenstechov. He was not buried until three days later, due to an argument between the cities of Piltz and Chenstechov over which should have the zechus of having him buried in their city.

According to his will, an ohel was not put up on his kever.

His sefer Sifsei Tzaddik on Torah somehow reached Eretz Yisrael, where it was later reprinted.

In 1520, Portuguese navigator Ferdinand Magellan reached the Pacific Ocean after passing through the South American strait that now bears his name.

In 1861, the Confederate Congress admitted Missouri as the 12th state of the Confederacy after Missouri’s disputed secession from the Union.

In 1912, Albania proclaimed its independence from the Ottoman Empire.