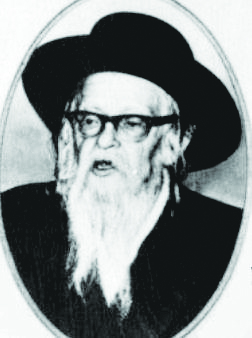 Harav Dov Berish’s maternal grandfather was the seventh link in an unbroken chain of poskim beginning with the Shach. Reb Berish’s paternal grandfather was a disciple of Harav Yaakov Loeberbaum, author of Nesivos Hamishpat. His father, founder and Rosh Yeshivah of Kochav MiYaakov, was his primary teacher until he was niftar, just two weeks before Reb Berish’s bar mitzvah. Thereafter, he became a student of his two older brothers, Harav Yitzchak of Horimlov (where Reb Berish was also born) and Rav Nachum of Dombrova.

At the age of 19, Reb Berish married Yachat, the daughter of Harav Yisrael Yosef Kluger of Tchebin. At the age of 24, he received semichah from Harav Yitzchak Shmelkes, the Beis Yitzchak. He refused many offers to serve as a Rav and made his living as a merchant. Together with his wife, he ran a modest coal business for support.

In 1923 he assumed the title of Tchebiner Rav when the Rav was niftar. He also founded a yeshivah to which students came from all over Poland.

Along with his wife and youngest daughter, the Rav was deported to Sverdlovsk, Siberia, in late 1940. He continued to write Torah chiddushim even in Siberia, on scraps of paper and wood. With the dissolution of the labor camp, the Rav escaped to Bukhara.

On Erev Pesach, in 1946, the Tchebiner Rav arrived in Yerushalayim, which he was to call home for the rest of his life. He settled in the Shaarei Chessed neighborhood.

The Rav’s responsa were collected in the sefer Dovev Meisharim.

His son-in-law and successor as Rosh Yeshivah of Kochav MiYaakov was Harav Baruch Shimon Schneersohn.

In 1620, 41 Pilgrims aboard the Mayflower, anchored off Massachusetts, signed a compact calling for a “body politick.”

In 1918, fighting in World War I ended as the Allies and Germany signed an armistice in the Forest of Compiègne.

In 1942, during World War II, Germany completed its occupation of France.

In 1972, the U.S. Army turned over its base at Long Binh to the South Vietnamese, symbolizing the end of direct U.S. military involvement in the Vietnam War.