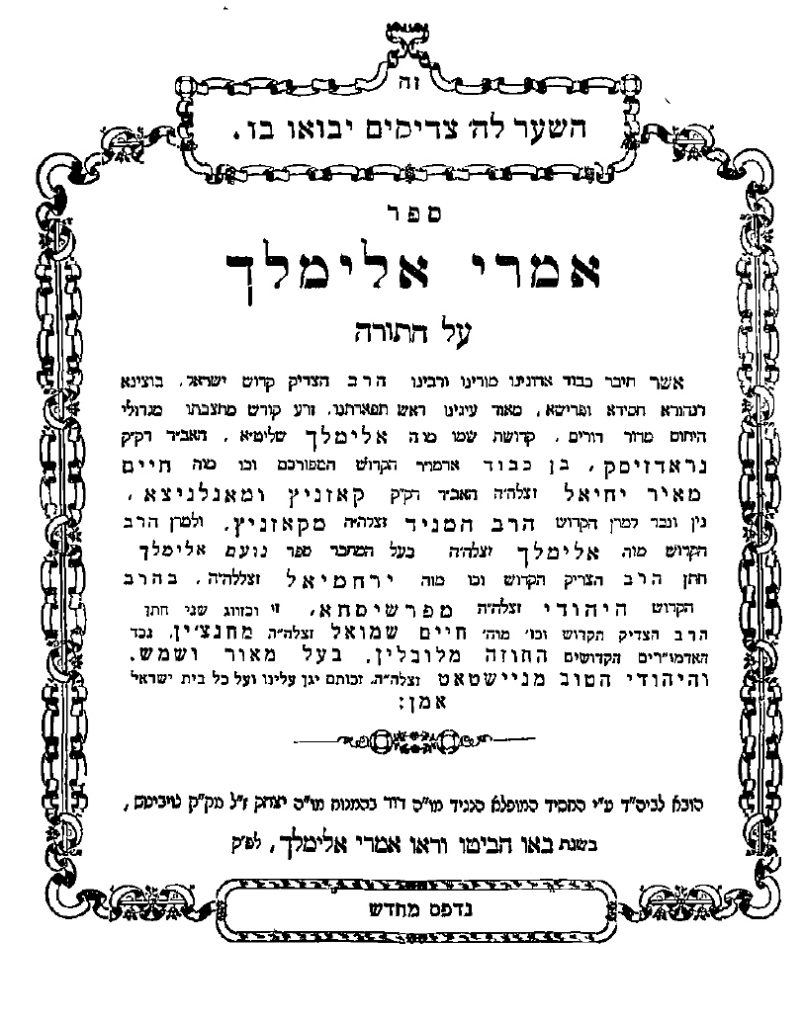 In 2448/1312 B.C.E., Hashem spoke to Moshe and to Aharon in the land of Egypt, instructing them regarding the Jewish calendar: “This month shall be for you the head of months, the first of the months of the year” (Shemos 12:1–2). This was the first mitzvah given to Bnei Yisrael. On that occasion, Hashem also commanded them regarding the korban Pesach and the various other observances of the Yom Tov.

In 2450/1311 B.C.E., the Mishkan was completed and Aharon Hakohen performed the service of the korbanos for the first time.

In honor of the dedication of the Mishkan, the nasi of each of the 12 tribes brought a korban, each one on his appointed day. Today was the turn of Nachshon ben Aminadav, nasi of the tribe of Yehudah.

5566/1806, Harav Yosef Hochgelerenter of Zamusz, zt”l, mechaber of Mishnas Chachamim on the Rambam

Harav Elimelech of Grodzisk was born in 5584/1824. His father was Harav Chaim Meir Yechiel of Mogelnitza, the son of Harav Avi-Ezri of Grenitz, who was the son-in-law of the Kozhnitzer Maggid. His mother was the daughter of Harav Elazar of Lizhensk, son of the Rebbe Reb Elimelech. Young Elimelech was named after this grandfather.

He married the daughter of Harav Yerachmiel of Peshischa, the son of the Yehudi Hakadosh.

After his father’s petirah in 5609/1849, Reb Elimelech initially refused to lead and, instead, traveled to Sadigura, where the Ruzhiner Rebbe, Harav Yisrael, lived. Reb Yisrael rebuked him for not wanting to lead the Chassidus and said, “What is so hard about leading the Chassidus? If a Yid — Avraham ben Sarah — asks for a yeshuah, just daven for him and Hashem will help!”

When Reb Elimelech returned home, the first person who came to him with a kvittel bore the name Avraham ben Sarah! Reb Elimelech saw in this a sign from Heaven that he should accept the yoke of leadership.

Reb Elimelech of Grodzisk experienced much suffering in his life; many of his children died young. In 5648/1888, his first Rebbetzin was niftar. He subsequently married the daughter of Harav Chaim Shmuel of Chentchin, a descendant of the Maor Vashemesh of Cracow. Two sons were born to him and his second Rebbetzin in his old age; one of which was Harav Klonimus Kalman, the Piaseczna Rebbe, mechaber of Chovas Hatalmidim, Eish Kodesh and other sefarim. However, Reb Elimelech did not merit to raise these sons, as he was niftar on 1 Nisan 5652/1892.

The sefarim Imrei Elimelech and Divrei Elimelech are unusual in that they were printed during Reb Elimelech’s lifetime, uncommon for the works of Chassidishe Rebbes of his generation. In the introduction to one of his sefarim, he humbly writes that after many Gedolim gave their haskamah to the sefer, he felt obligated to print it.

In 1834, the U.S. Senate voted to censure President Andrew Jackson for the removal of federal deposits from the Bank of the United States.

In 1930, the names of the Turkish cities of Constantinople and Angora were changed to Istanbul and Ankara.

In 1979, America’s worst commercial nuclear accident occurred with a partial meltdown inside the Unit 2 reactor at the Three Mile Island plant near Middletown, Pennsylvania.