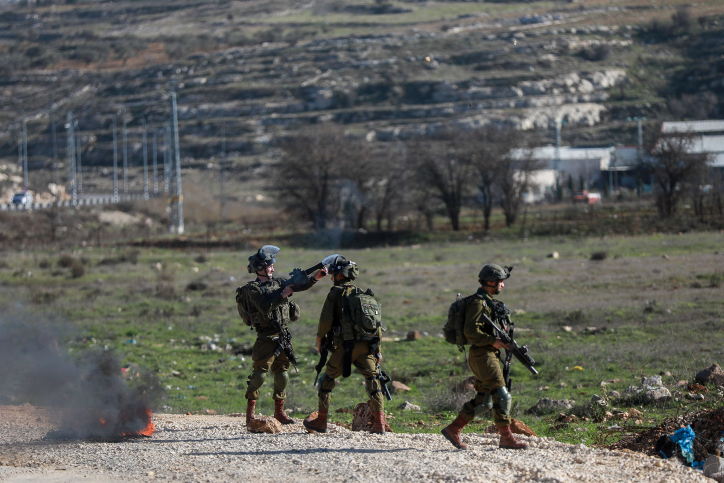 Under heavy security, KKL resumed planting trees in the Negev on Wednesday morning after an eruption of Bedouin violence on Tuesday stopped the planting activities.

At least 18 residents of the Bedouin community in the Negev have been arrested in rioting that broke out Tuesday to protest KKL tree-planting ceremonies ahead of Tu BiShvat.

Rioters placed rocks on railway tracks near the Goral intersection, forcing a train to come to an emergency stop. At the Segev Shalom intersection, rioters set tires on fire and threw fireworks at police personnel, as well as throwing rocks at passing cars and a bus. Two police officers suffered minor injuries. Police restored order quickly.

Earlier Tuesday, soldiers from the IDF’s Yoav Unit, Border Police and Israel Police forces were providing security at a KKL ceremony near the Bedouin village Mulada when rioting broke out. At least 18 suspects were arrested and brought in for questioning for allegedly throwing rocks at the security forces.

A group of several dozen young Bedouin attacked Haaretz reporter Nati Yefet after he arrived at Segev Shalom to cover the rioting. Although Yefet presented his press pass, about 20 Bedouin attacked him, stole his car, and set it on fire. Police extracted Yefet, who was uninjured.

After the Bedouin violence on Tuesday was determined to be an expression of ethno-nationalism, the Shin Bet security agency was assigned to investigate who placed the rocks on the railway tracks. If the train had derailed, it could have caused a mass-casualty event.

Hamas, like it did during the Arab Israeli rioting last May during Operation Guardian of the Walls, tried to fan the flames of the violence on Tuesday. The organization put out a message of congratulations “to our people in the Negev who are rising up against the Zionist oppression and aggression. Do not let our people in the Negev deal with the occupation on their own. All our people ‘inside occupied Palestine’ [a term the organization uses for Israel] must be with them.

“The occupation [Israel] should think 1,000 [times] about the idea of harming the land, the people, and the holy sites. The time has come for the occupation to pay a price for its presence and aggression in our land,” Hamas said.

Housing and Construction Minister Ze’ev Elkin said Wednesday in an interview with Kan News, “We will continue to plant trees, like we should. Today is the last day of this [tree-planting] round. There has been a very cynical attempt by Netanyahu and his people to exploit this event and upset people. The previous government stopped tree planting because of political pressure.”

Elkin said, “We will handle the political problem. I understand the pressure that the Bedouin public is putting on Ra’am. These are state-owned lands. I’m in favor of solving the problems through dialogue, and that is the line [Ra’am leader Mansour] Abbas is taking, which I welcome.”

Head of the Omer Local Council near Be’er Sheva Pini Badash said he expected the violence on Tuesday to “develop into something bigger, a real intifada. The government has started to give in. They gave them a finger, now they want the whole hand.

“It started with three Bedouin communities for development. Something that was supposed to help everyone. But they have started crossing all the lines – the government needs to say, no more,” Badash said.

“The government of change is committed to solving the Bedouin problem and regulating the Negev. Politicians from all sides should calm things down rather than fan the flames. I condemn the violence at the site and support the police actions to restore order,” Lapid said.

Communications Minister Yoaz Hendel said, “The Negev rioting must not be met with forgiveness. The big lie making rounds here in the past decade, the lack of governability in the Negev and Galilee and the ineffectuality under the Likud government, are not an excuse. We are in power and we have no possibility other than to restore sovereignty to the Negev.”

Opposition leader Binyamin Netanyahu earlier called on Prime Minister Naftali Bennett to condemn what he described as “incitement” from the Ra’am party.

“No one will stop trees from being planted in Israel. I give my full support to the security forces and demand that Bennett issue an immediate condemnation of the Ra’am incitement,” Netanyahu said.