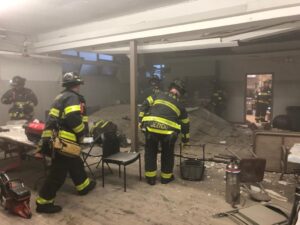 A ceiling in the basement dining room of Yeshiva Bais Hatalmud collapsed Sunday afternoon as the bachurim and yungeleit were eating lunch, but there were only minor injuries, in what witnesses describe as “a neis.”

Around 2:40 p.m., people in the dining room started hearing some noises. “It sounded like raindrops, which did not make sense since we were indoors,” Rabbi Yisroel Rand, a yungerman who also serves as cook and kitchen manager in the yeshiva, told Hamodia. “We looked up and saw some cracks in the ceiling which were getting larger and larger, so we started backing up slowly.

“Suddenly, everything came crashing down, and I got trapped into a corner of the dining room with two bachurim, and we were blocked by the locked kitchen door. Some of the ceiling landed on my head, and I managed to shield the two other guys to save them. In the meantime, I felt the pressure of the ceiling as it hit me on my head. When the dust cleared, I was able to get the door open and we escaped through the back.”

He said he had some neck pain, but is okay otherwise.

“It was a neis this happened at the end of lunch, when not a lot of people were in the dining room, and it was a neis that no one was seriously hurt,” Rabbi Rand said.

Another yungerman who was in the dining room told Hamodia, “I was sitting, eating lunch and the next thing I know I find myself lying flat on the floor with the ceiling on top of my head. I thought, ‘G-d knows what happened, and how many people are dead.’ I didn’t know what happened, but I was able to squeeze myself out.” The yungerman’s foot is swollen and his jacket is torn, but otherwise he is fine.

The floor of the beis medrash, directly above the collapsed ceiling, did not suffer any damage.

Hatzalah responded to the scene and examined several people, but they had only minor injuries, and no one was hospitalized.

“The yeshiva has had a hischadshus recently,” Harav Chaim Leib Perkowski, shlita, rosh yeshiva, told Hamodia. “There has been a real ribui in the oilam, and perhaps a neis happened in that zechus, and in the zechus of the meyasdim of the yeshiva,” Rav Perkowski said, noting that Sunday is the 60th yahrtzeit of the yeshivah’s legendary founder, Hagaon Harav Aryeh Leib Malin, zt”l.

A kinnus for the yahrtzeit is scheduled for 6 p.m. in the beis medrash.