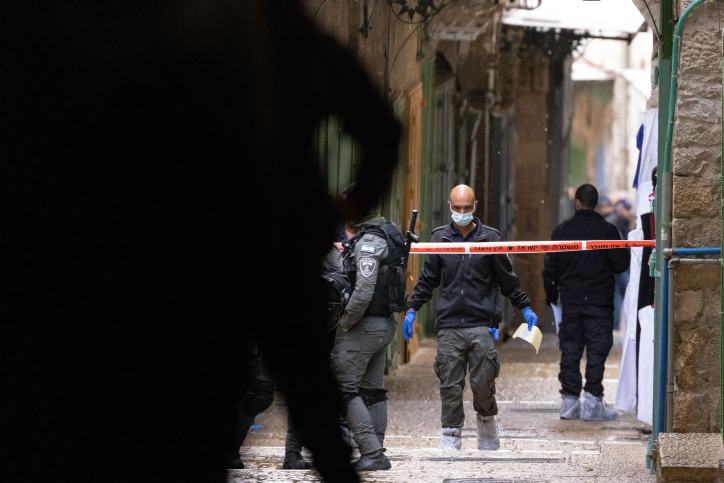 Hundreds of Palestinians marched through the Shuafat refugee camp in East Yerushalayim on Sunday in support of a Hamas gunman who killed one Israeli, Hy”d, and wounded four others in the Old City.

The rally was initiated by the terrorist organization in an area that is under full Israeli control.

Demonstrators marched through the camp’s main street towards the home of the terrorist — 42-year-old schoolteacher Fadi Abu Shkhaydam – who died in a firefight with security forces in the attack.

The crowd set tires on fire and threw rocks at Border Police forces that arrived at the scene while chanting “the martyrs are going to Jerusalem in the millions,” praising Hamas’s military wing.

Residents also called for a general strike in the neighborhood on Monday.

Israeli security forces knew that Abu Shkhaydam was a member of Hamas, but was never arrested by the Shin Bet security agency. He worked as a teacher and frequented the Al Aqsa Mosque, where he urged parishioners to not allow Israeli troops onto the mount and to resist them by force.

Abu Shkhaydam’s wife and several of their children fled Yerushalayim three days before the attack.

His son Aboud posted on social media a picture of his father with a weapon after the attack, writing that he is proud to be the son of a “martyr.”

Hamas praised Abu Shkhaydam in an official statement, saying that “the Holy City continues to fight against the foreign occupier, and will not surrender to the occupation.”

“The youth continues their legitimate fight until they achieve their freedom, free their land, and retrieve their holy places.”

The terror organization didn’t claim responsibility for the attack.

Meanwhile, for the first time since Operation Guardian of Walls in May, Arab terrorists hurled Molotov cocktails at Israeli homes in the a-Tur neighborhood.

A Border Policeman was lightly wounded during a violent riot by Arabs in Kfar HaShiloach after terrorists threw a Molotov cocktail at the Israeli forces, who responded only with crowd dispersal means.

Line 165 from Jerusalem to Ma’ale Adumim was attacked with rocks near Wadi Joz. The windshield was damaged and the driver was slightly injured in the eyes by glass shards.

A bus driving near Anatot just north of Jerusalem was hit with a firebomb. The driver suffered an anxiety attack. The windshield was damaged.

Terrorists from the village of Beit Fajjar threw three Molotov cocktails at the southern gate of Kibbutz Migdal Oz, situated south of Yerushalayim. Heavy damage was caused to security components on the fence, but there were no casualties.

Israeli vehicles were also attacked with stones on Road 465 in the Deir Nizam area, near Neve Tzuf. Damage was caused to vehicles.

In another attack near Chomesh in the Shomron, terrorists threw a Molotov cocktail at vehicles. On Road 55 near Azzun, and on Road 458 near El Muayir, two vehicles were damaged in stone attacks.

There were no Israeli casualties in any of the attacks.