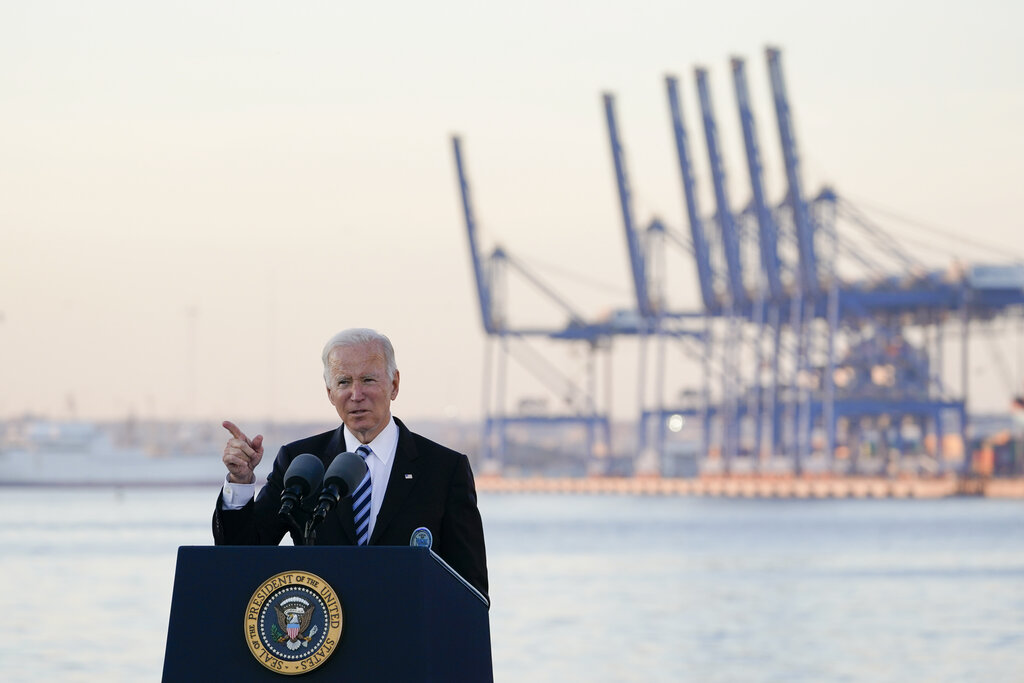 President Gerald Ford wore a pin with the acronym “WIN,” which stood for “whip inflation now.”

President Jimmy Carter donned a cardigan sweater to encourage Americans to turn down their thermostats to reduce rising energy costs.

Now the specter of inflation is stalking President Joe Biden, frustrating voters who would otherwise be enjoying the benefits of an economy that’s climbing out of a pandemic-induced recession.

Although administration officials have repeatedly insisted that inflation is a temporary problem, it reached its highest level in three decades last month, according to new numbers released Wednesday by the U.S. Bureau of Labor Statistics.

Prices rose 6.2% in October when compared with last year, and they jumped 0.9% from September to October.

Biden has yet to pull on a sweater or fasten a pin to his suit jacket, nor has the problem reached the level it has in the past. But the latest figures forced him to confront the issue more forcefully, releasing a statement to say “inflation hurts Americans’ pocketbooks” and insisting that “reversing this trend is a top priority for me.”

The news put a damper on Biden’s trip to Baltimore’s port, where he planned to herald the recent passage of bipartisan infrastructure legislation that he’s expected to sign Monday. Instead he used his remarks to assure Americans that he’s focused on rising costs, acknowledging that “many people remain unsettled about the economy.”

“Everything from a gallon of gas to a loaf of bread costs more, and it’s worrisome even though wages are going up,” he said. “We still face challenges, and we have to tackle them.”

Biden has blamed inflation in part on higher energy prices, and he’s asked his administration to develop new plans to address the issue.

“Did you ever think you’d be paying this much for a gallon of gas?” he said. “In some parts of California, they’re paying $4.50 a gallon.”

Inflation is just one of a series of interlocking issues, including supply-chain bottlenecks and the COVID-19 pandemic, that have lingered longer than Biden expected, submerging his approval ratings as his first year in office draws to a close.

He’s in a particularly precarious position because there is little he can do to quickly alleviate the problem, experts say. And even as the job market rebounds and wages rise, inflation threatens to swallow those gains and provide a daily reminder of the problem whenever voters dig into their wallets or swipe their credit cards.

“When you tell people things are temporary, and the dark cloud doesn’t lift, you look disingenuous,” said Douglas Brinkley, a presidential historian at Rice University, adding that “there’s no bigger drag on presidents in modern times than inflation. And it’s hard to find a quick way out of that morass.”

John Anzalone, a Democratic pollster who has worked with Biden, acknowledged that rising prices have an outsize effect on public opinion.

“There is a psychology to inflation that is different from everything else, and it tends to drive how people view the economy because they experience it every day whether it is at the grocery store, gas pump or buying household goods,” he said.

Last month, the unemployment rate fell to 4.6%, a sign of an ongoing economic recovery that the Federal Reserve has tried to shepherd along with accommodating monetary policies, including purchasing billions in bonds and keeping borrowing rates near zero.

These policies have helped the demand side of the American economy rebound much faster than expected, said Kathleen Bostjancic, chief U.S. financial economist at Oxford Economics.

The problems have cropped up on the supply side. Manufacturers across the globe have struggled to keep pace with demand for a series of reasons, including shortages of workers and COVID-19 restrictions, Bostjancic said. On top of that, the intricate supply chain has been strained to the breaking point to keep products flowing from overseas factories to American doorsteps.

The result, Bostjancic said, is not surprising — the cost of goods is going up.

“It was easier to turn the supply side of the economy off than to turn it back on,” said Bostjancic, who noted that consumer demand is increasing in anticipation of the year-end shopping season.

Republicans are using price spikes to attack Biden’s economic agenda, and candidates will probably use it as political fodder ahead of next year’s midterm election.

House Minority Leader Kevin McCarthy, R-Calif., on Wednesday blamed the Biden administration’s policies for high inflation, saying they have “only exacerbated the anxiety families face as we approach the most expensive Thanksgiving on record that will involve soaring prices and a scarcity of goods.”

Republicans and some economists — most notably Lawrence Summers, the former Harvard president and adviser to President Barack Obama, and Treasury secretary under President Bill Clinton — have questioned whether government spending on coronavirus relief measures has caused inflation to rise.

Jared Bernstein, a member of the White House Council of Economic Advisors, said that various initiatives are “generating heat,” but that it’s a worthwhile trade-off to enact child tax credits and prevent evictions.

Bernstein said it would be inaccurate to compare today’s inflation to the rising prices that bedeviled Americans in the 1970s and ‘80s, noting that the current issue is rooted in the pandemic.

“The nature of what’s driving this inflation is simply much more temporary now than it was then,” he said.

However, the pandemic has lasted longer than expected because “nobody saw delta coming,” said Bernstein, referring to the more contagious coronavirus variant that has contributed to sharp increases in hospitalizations and deaths.

Even now with vaccines widely available, more than 1,000 people are dying each day, according to the Centers for Disease Control and Prevention.

Though Republicans have used inflation to attack Biden, the numbers are actually a “signal that the economy has been able to recover very rapidly,” said Leo Feler, a senior economist at UCLA Anderson Forecast.

Simply put, if consumers didn’t have money to spend on goods, demand for supplies would not be high, Feler said.

He also said that Biden’s ability to address inflation in the short term is very limited and that longer-term solutions have downsides. The president, for example, could appoint governors to the Federal Reserve who would be inclined to raise interest rates, a tried-and-true way to choke off inflation.

“That would solve inflation but also kill off consumer demand,” Feler said. “It’s kind of like throwing the baby out with the bathwater because at the same time you stop inflation, you stop the recovery and we would still not have enough supply to meet demand.”