Israel Netanyahu: Bennett-Ra’am-Meretz Gov’t Must Pass From the World
Israel 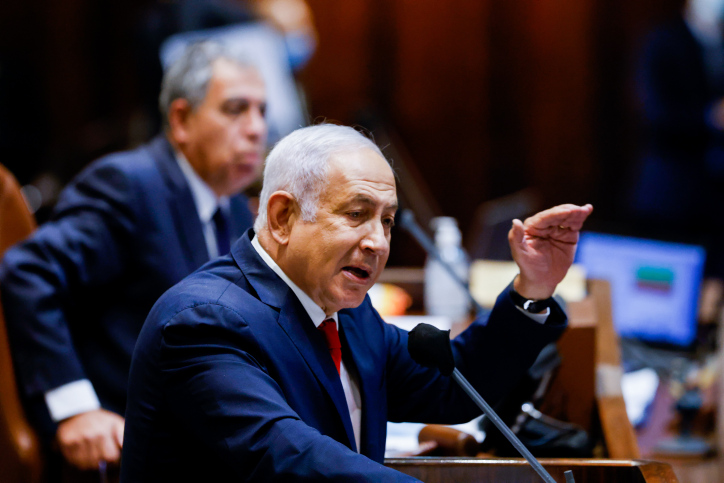 ​​At the request of 40 MKs, the Knesset on Monday held a debate entitled “The Bennett-Abbas government is resuming the diplomatic process to divide the Land and establish a terror state in the heart of the Land of Israel,” with the participation of Prime Minister Naftali Bennett.

Following a debate in which representatives of the various parliamentary groups spoke, Bennett took to the podium and said “I was asked to respond… here is my answer: There are no negotiations on establishing a terror state in the heart of the land.”

The coalition boycotted a roll-call vote that was held following the debate on the Prime Minister’s statement. 52 MKs voted against the statement, no MKs voted in favor of the statement, while five MKs abstained.

After Bennett spoke, Leader of the opposition MK Binyamin Netanyahu (Likud) took to the podium and said “The Bennett-Ra’am-Meretz government must pass from the world for three reasons: Firstly, its anti-social budget; secondly, its decision to accept the Iranian nuclear [program]; and thirdly, its agreement to impose the Islamic Movement on Israel’s Arabs and the Negev.

“Bennett is bragging about Israel’s economic growth. He’s one of the greatest credit thieves of modern times. He stole a book, he stole the Singapore plan, he stole an election. Anyone who understands economics knows that economic growth is not something that is created out of nothing in four months. It is the result of an orderly policy that we pursued for four years, particularly during the corona period. Remember the criticism about the grants we gave citizens during the corona period? People cried out ‘You are ruining Israel’s economy.’ The opposite happened. We saved Israel’s economy and we saved the citizens of Israel from an economic crisis. Were it not for our actions, Israel’s economy would have crashed.

“In May, even before the change of government, Israel was ranked for the first time in history among the top 20 economies in the world. This is a huge achievement, thanks to our policy. Before the government changed, the Bank of Israel determined that we grew the economy by 15.4%. It is because of this [sharp increase] that we brought, and only because of it, that you can brag today about a 7% growth as if you did something. You did nothing.

“You say you brought a ‘social budget.’ It’s not social. It is a budget that raises taxes and prices, that harms the periphery and abuses the weaker sectors. I suggest to you, Bennett – maybe stop with the spins already. You already know you won’t be here long. So use the time to do something real,” Netanyahu said.

Netanyahu also addressed the Iranian issue, saying “Iran recognizes your weakness and rushes forward, trying to seize every opportunity, and unfortunately, in less than a month, Iran will return to talks with the powers about a return to the nuclear agreement, an existential danger to Israel’s security. And all this without any disruption, because what does this government do? Lapid is sticking to his commitment to the ‘no surprises’ policy, while Bennett remains silent or tweets here and there. When I was prime minister we acted differently. Fight it; mobilize public opinion against this dangerous agreement; you are doing nothing. You are bowing your head like someone who heads a protectorate.

“World leaders do not take Bennett seriously because they know he’s a puppet prime minister who doesn’t pass the electoral threshold. He is merely a stone you step on en route to Lapid as prime minister. That is the left’s dream,” said Netanyahu.

“You are imposing the Islamic Movement on Israel’s Arabs. The tens of billions that you gave the Islamic Movement will come back to us like a boomerang. This money is flowing without any supervision, without any responsibility. We know where it will end up. The citizens of Israel will pay the price of this shameful capitulation to Ra’am for years to come.”