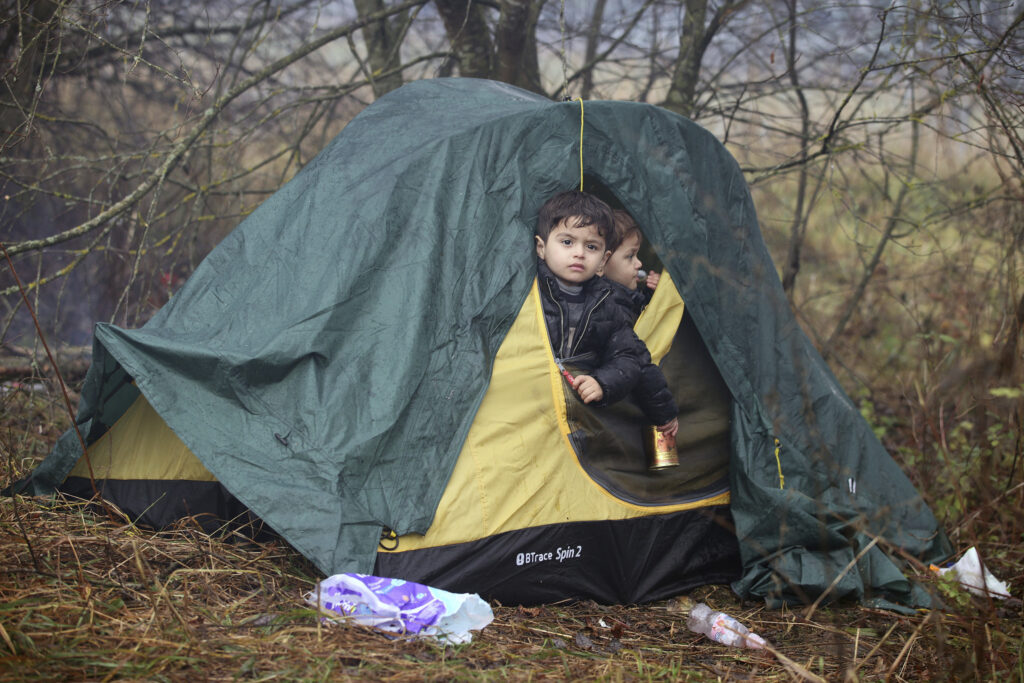 Polish police posted a video early Tuesday showing a group of migrants who had camped overnight just on the far side of Poland’s eastern border in Belarus. Polish riot police and coils of razor wire faced the migrants and police said the situation overnight was calm.

That followed a day of heavy tensions on the border, where a large group of migrants — hundreds if not thousands of people mostly from the Middle East and encouraged by Belarus — sought to illegally push their way into Poland.

In videos posted on Twitter, tents and campfires can be seen, in near-freezing temperatures, as the Polish police play an announcement warning the migrants that crossing the Polish border is only allowed at official border crossings. Visas are required.

But as of early Tuesday, the nearest crossing point, in Kuznica, in the northeast of the country, was closed.

The situation marks an escalation in months of migration pressure against Lithuania and Poland, and to a lesser extent Latvia, the three EU states on the bloc’s eastern border with Belarus. The EU says Belarus is building the pressure, intending to destabilize the bloc in retaliation for Western sanctions.

Polish Prime Minister Mateusz Morawiecki, accompanied by Defense Minister Mariusz Blaszczak, went to the border on Tuesday morning to meet with border guards and other security officials. Morawiecki praised them, also on behalf of the EU, for their “effective defense of our border,” which is part of the EU’s eastern frontier.

“We do not know what else Lukashenko’s regime will come up with — this is the reality,” Morawiecki said.

The migrants are mostly from Iraq and Syria, though some have come from Africa, seizing on a hope for a new migration route to enter Europe. Most seek to only pass through Poland to reach Germany or other countries in western Europe.

Poland has received strong signals of support and solidarity from the EU and EU member states and the United States as it faces its border crisis.

Germany’s outgoing interior minister, Horst Seehofer, said on Tuesday that all EU countries “must stand together, because (Belarusian President Alexander) Lukashenko, with the support of Russian President Vladimir Putin, is using people’s fates to destabilize the West.” He called for the European Commission to support Poland in securing the border.

“The Poles have reacted correctly so far,” Seehofer told German daily Bild of Poland’s reinforcement of the border. “We cannot criticize them for securing the EU’s external border with admissible means … the Poles are fulfilling a very important service for the whole of Europe.”

Many of the migrants fly to Minsk, the capital of Belarus, on tourist visas, and from there travel by taxi to the border with Poland. The EU is seeking to pressure airlines not to facilitate the illegal migration.

Although direct flights from Iraq to Minsk were suspended in August, migrants have been flying into Belarus via commercial and chartered flights from Syria, Turkey, the United Arab Emirates and even Russia, according to recent internal EU migration reports seen by The Associated Press.

On social media, smugglers have advertised transportation from Belarus to Germany by car. Drivers smuggling people across the Polish-German border were mainly from non-EU countries, according to the reports, although there were also EU nationals involved. Many of the migrants have ended up in Germany. But some continued their journey all the way to Finland by ferry via Sweden, one report said.