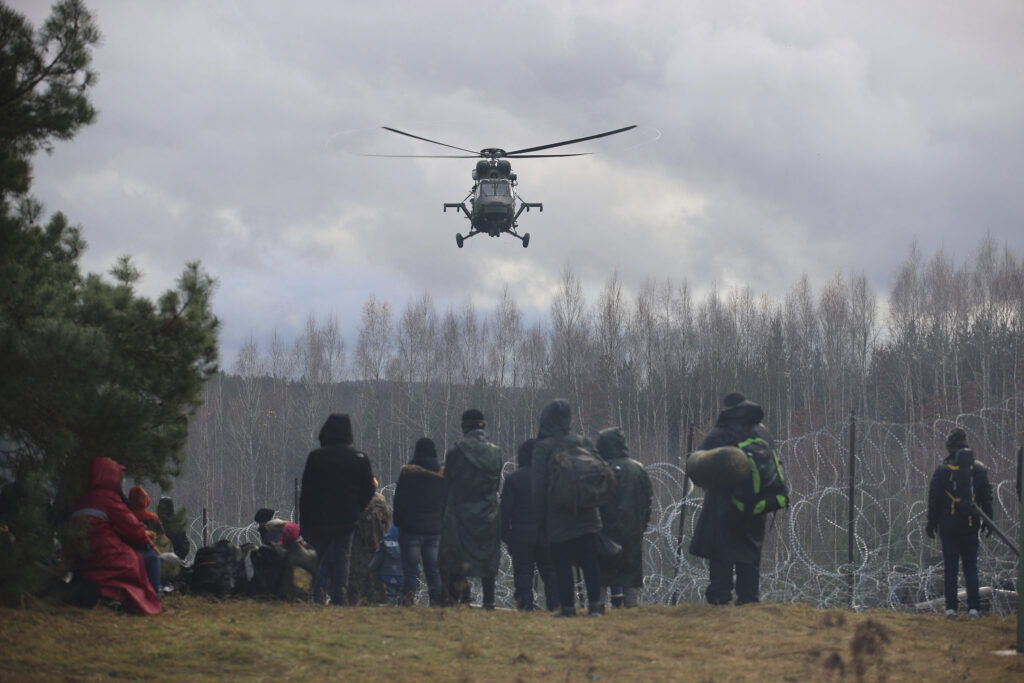 Poland has increased security at its border with Belarus, on the European Union’s eastern border, after a large group of migrants in Belarus appeared to be congregating by the frontier, seeking to try to force their way into Poland, officials said Monday.

Video footage from Belarusian media showed people using uprooted trees to try to get through a fence.

Poland’s interior ministry said it had rebuffed an attempt at illegal entry, saying the situation is under control. It posted a video showing migrants trying to force a razor fence barrier and throwing objects at Polish forces lining the fence.

There was no way to independently verify what was happening, as journalists have limited ability to operate in Belarus, while a state of emergency in Poland is keeping reporters, human rights workers and others out of the area.

The massing of people at the border appeared, however, to signal an escalation of a crisis that has being going on for months in which the autocratic regime of Belarus has encouraged migrants from the Middle East and elsewhere to illegally enter the European Union, at first through Lithuania and Latvia and now primarily through Poland.

Anton Bychkovsky, spokesman for Belarus’ State Border Guard Committee, said in a statement sent to The Associated Press that the migrants at the border between Belarus and Poland are seeking to “exercise their right to apply for refugee status in the EU.” Bychkovsky insisted they “are not a security threat” and “are not behaving aggressively.”

Bychkovsky added that, according to the refugees, they gathered into such a large group in order to avoid “forcible ousting by the Polish side.”

But the massing of a large number of people was viewed as a threat by Poland and other European countries, including Germany — the main destination for many of the migrants.

“It instrumentalizes refugees and migrants in a way that’s politically and from a humanitarian point of view condemnable. And Europe will make a united stand against this continuous hybrid attack,” Seibert said.

The European Union said it hoped that Poland, an EU member state, would finally accept help from Frontex, the border agency, a step Poland’s ruling nationalists have so far refused.

In Brussels, a spokesman for the European Commission, Adalbert Jahnz called it “a continuation of the desperate attempt by the (Belarusian President Alexander) Lukashenko regime to use people as pawns to destabilize the European Union and of course the values that we stand for.”

Bix Aliu, the U.S. charge d’affaires in Warsaw, tweeted in Polish that Lukashenko’s regime was risking the migrants’ lives and “using them to escalate the border crisis and provoke Poland.”

“Hostile actions by Belarus are exacerbating the situation on the border with the EU and NATO dangerously and must end immediately,” he said.

Polish Defense Minister Mariusz Blaszczak said on Twitter that more than 12,000 soldiers have been deployed to the border, up from the 10,000 soldiers that were there recently. He added that a volunteer Territorial Defense force was put on alert.

Since the summer, Poland and Lithuania have faced the pressure of migrants from the Middle East and Africa trying to cross into the EU. Poland has sought to block the attempts or send those they catch back into Belarus.

Warsaw and the EU say it’s an organized action by the Belarusian government aimed at destabilizing the bloc in retaliation for Western sanctions.