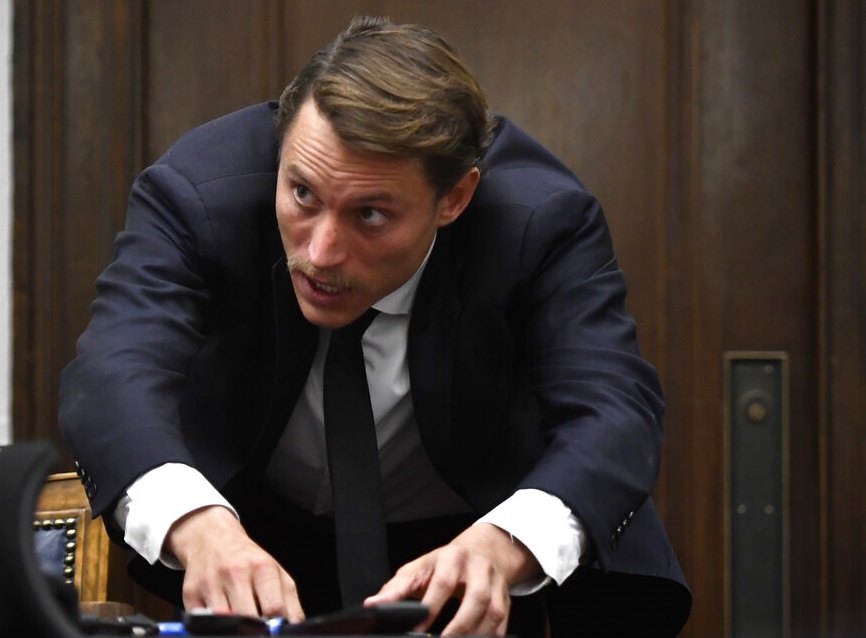 The first man shot by Kyle Rittenhouse on the streets of Kenosha was “hyperaggressive” that night, threatened to kill Rittenhouse and someone with him, and later lunged for Rittenhouse’s rifle just before the 17-year-old fired, witnesses testified Thursday.

The testimony at Rittenhouse’s murder trial came from two witnesses who had been called to the stand by the prosecution but gave accounts far more favorable to the defense in the politically charged case.

Rittenhouse, now 18, is charged with shooting three men, two of them fatally, in the summer of 2020. The aspiring police officer had gone to Kenosha with an AR-style semi-automatic rifle and a medical kit in what he said was an effort to safeguard property from violent protests that broke out over the police shooting of a Black man.

Richie McGinniss, who was recording events on a cellphone that night for the conservative website The Daily Caller, testified that Joseph Rosenbaum, the first man shot that night, was killed after chasing down Rittenhouse and lunging for the gun.

“I think it was very clear to me that he was reaching specifically for the weapon,” McGinniss said.

Ryan Balch, a former Amy infantryman who carried an an AR-style semi-automatic rifle that night and walked around patrolling the streets with Rittenhouse, testified that Rosenbaum was “hyperaggressive and acting out in a violent manner,” including trying to set fires and throwing rocks.

Balch said that he got between Rosenbaum and another man while Rosenbaum was trying to start a fire, and Rosenbaum got angry, shouting that if he caught anyone of the guys alone that night, he was going to kill the.

Balch said that Rittenhouse was within earshot and that he believed the threat was aimed at both of them.

Prosecutors have portrayed Rittenhouse as the instigator of the bloodshed, while his lawyer has argued that he acted in self-defense, suggesting among other things that Rittenhouse had reason to fear his weapon would be taken away and used against him.

The killing of Rosenbaum, 36, has emerged as one of the most crucial and most disputed moments of the night. It is one of the few moments not clearly captured on video.

In an attempt to undo some of the damage done by his own witness, prosecutor Thomas Binger said McGinniss’ testimony about what Rosenbaum was intending to do was “complete guesswork.”

McGinniss replied that he cursed at them, “And then he reached for the weapon.”

But McGinnis also appeared to boost the prosecution’s case when he said he had a sense that something bad could happen that night because of all the guns in the area.

In his testimony, McGinniss said that as Rosenbaum lunged, Rittenhouse “kind of dodged around” with his weapon and then leveled the gun and fired.

Binger repeatedly tried to get McGinniss to say Rosenbaum was not “lunging” but “falling” when he was shot, as McGinniss said in a media interview days after the shooting.

But McGinniss said: “He was lunging, falling. I would use those as synonymous terms in this situation because basically, you know, he threw his momentum towards the weapon.”

As prosecutors played footage of Rosenbaum lying fatally wounded in a car lot, McGinniss struggled to keep his composure on the stand, rapidly inhaling and exhaling, then averting his eyes from a video monitor. The prosecutor apologized for playing it, saying he had to.

Across the room, Rittenhouse appeared to look away from his desktop monitor and cast his eyes downward as the video showed Rosenbaum bleeding from the head, groaning loudly.

The defense also has said that a shot fired by someone in the crowd moments before Rittenhouse began shooting made Rittenhouse believe he was under attack.

Kenosha Detective Martin Howard testified that video footage shows that a protester, Joshua Ziminski, had fired the first shot into the air. Howard said he used a stopwatch and timed five or six videos to determine that 2.5 seconds later, Rittenhouse began firing at Rosenbaum.

A wealth of video has been played in court that captured the tumultuous demonstration and the series of shootings.

Rosenbaum, according to police testimony, was unarmed.

The shooting of Rosenbaum set in motion the bloodshed that followed moments later. Rittenhouse shot and killed Anthony Huber, 26, a protester from Silver Lake, Wisconsin, who was seen on bystander video hitting Rittenhouse with a skateboard.

Rittenhouse then wounded Gaige Grosskreutz, 27, a protester from West Allis, Wisconsin, who had a gun in his hand as he stepped toward Rittenhouse.

Before testimony resumed Thursday, the judge dismissed a juror who had made a joke to a court security officer about the police shooting of Jacob Blake, the Black man whose wounding triggered the Kenosha protests. The juror, a retired man, declined to repeat the joke for the judge.

“It is clear that the appearance of bias is present and it would seriously undermine the outcome of the case,” Circuit Judge Bruce Schroeder said.

Prosecutors also replayed widely seen video of the interview that The Daily Caller did with Rittenhouse before the shooting.

It began with Rittenhouse, a former police youth cadet, in front of a boarded-up building, where he said he and other men were there “to protect this business, and part of my job is there’s somebody hurt, I’m running into harm’s way.” He also said he was there to provide medical aid.

McGinniss testified that he also went to talk to four Black people in the crowd who seemed angry. He said one of them had two rocks or brick-like stones in his hands, and another had a rock and a strap.

McGinniss said he asked them why they were mad, and they said that they were jumping on vehicles and that Rittenhouse came up to them with his gun. One member of the group accused Rittenhouse of waving his gun around as if he were in a movie, the witness said.

Rittenhouse, who is white, could get life in prison if convicted in the politically and racially polarizing case that has stirred furious debate over self-defense, vigilantism, the right to bear arms and the racial unrest that erupted around the U.S. after the killing of George Floyd in Minneapolis and other cases like it.