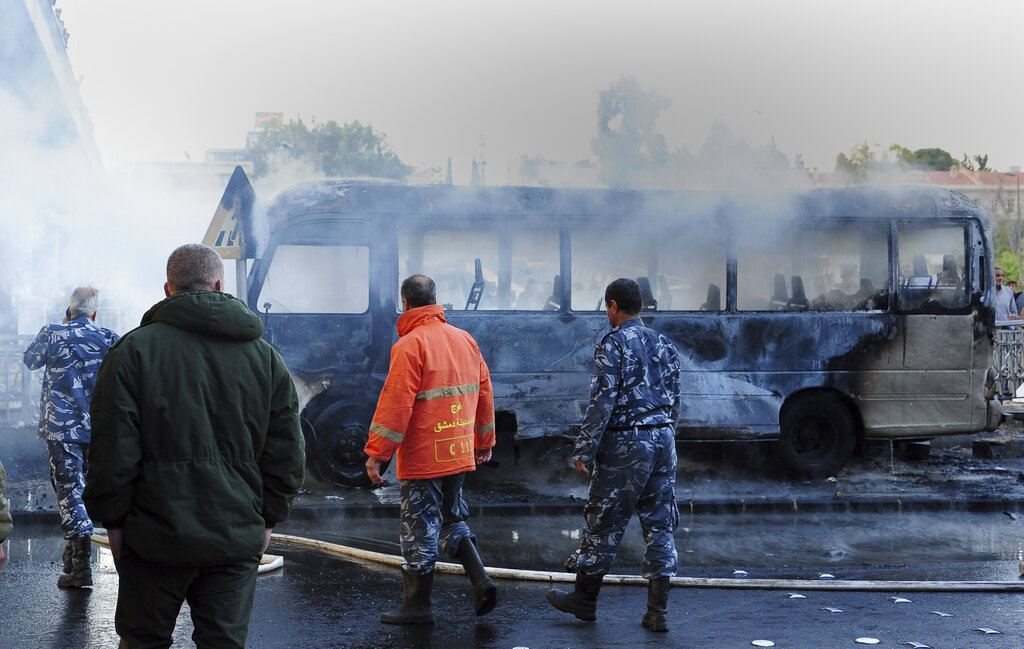 Two bombs attached to a bus carrying Syrian troops exploded in Damascus during the morning rush hour Wednesday, a military official said. Fourteen people were killed in the attack, one of the deadliest in the capital in years. According to additional reports from Syrian and Lebanese outlets, the casualties were Iranian officers, Israel Hayom reported.

While the Syrian government’s decade-long conflict with insurgents continues in parts of the country, including the rebel-held northwest, bombings in Damascus have become exceedingly rare since President Bashar Assad’s troops pushed opposition fighters from the capital’s suburbs in 2018.

Shortly after the Damascus bombings, government shells landed in a rebel-held town in northern Syria, killing at least 10 people, four of them children. The attack, part of the government campaign to regain control of areas still in opposition hands, was the worst violence in the region since a truce in March last year was negotiated by Turkey and Russia, allies of the opposition and Syrian government, respectively.

The bloody day in Syria shook a relative calm that had taken hold in the war-torn country in recent months. While the conflict remains unresolved, a decade later, military activities have subsided.

Forces of President Bashar Assad now control much of Syria after military support from allies Russia and Iran helped tip the balance of power in his favor. U.S. and Turkish troops, meanwhile, are deployed in parts of the country’s north.

The explosions in Damascus, which also left several wounded, happened at a busy intersection near a main bus transfer point where commuters and schoolchildren typically converge. After the blasts, Syrian state TV showed footage of smoke rising from a charred bus as soldiers hosed down the vehicle and onlookers flocked to a nearby bridge to watch.

A little known group calling itself the Qasioun Brigades claimed responsibility for the attack, saying the bombs were attached under the bus. It added in a short statement posted on social media that attacks in government-held areas will continue in retaliation for “massacres committed against our people in the liberated north.”

In rebel-held northwest Syria, rescue workers reported 10 people were killed, including four children and a woman, in government shelling of a town in the last rebel enclave in the country’s northwest. U.N. Deputy Regional Humanitarian Coordinator Mark Cutts described as “shocking” the reports of the shelling that hit a market and roads near schools as students were heading to classes.

Besides the four children killed, their teacher also died, according to UNICEF, the U.N. children’s agency.

“Today’s violence is yet another reminder that the war in Syria has not come to an end. Civilians, among them many children, keep bearing the brunt of a brutal decade-long conflict,” the agency said.

The attack was one of the most violent since the 2020 truce in the northwest, which has been repeatedly violated. Government forces often vow to take territories still out of their control.

In recent years, attacks in Damascus such as Wednesday’s have been rare. One of the last major explosions to take place was in 2017 — when suicide bombers hit a judicial office building and a restaurant, killing nearly 60 people. The attacks were claimed by Islamic State group militants. The extremist organization has not held territory in Syria since 2019, but it continues to represent a threat with sleeper cells, mostly hiding in Syria’s expansive desert.

State media initially described the Damascus attack as a roadside bombing. But they later quoted an unnamed Syrian military official as saying that bombs were attached to the vehicle’s exterior. A third bomb fell from the bus and was dismantled by troops, the official said. It is typical for the government to release information using anonymous sources in state media. It was not clear if all the dead were bus passengers.

Wednesday’s shelling in the northwest hit the town of Ariha, in Idlib province, which is mostly controlled by rebel groups, including the dominant Hayat Tahrir al-Sham, once affiliated with al-Qaida.

The Syrian Civil Defense, also known as White Helmets, said aside from the 10 killed, 20 more were wounded when dozens of shells landed in the town. The rescuers said they were still searching through the wreckage for survivors.

“It was a horrifying and very tiring day,” said Wael el-Hussein, a surgeon in Idlib who drove past the scene of the shelling minutes before it happened. He spent hours in the hospital afterwards operating on or otherwise treating 28 people, including many children, who suffered multiple injuries. One of the wounded died in the hospital.

“I think no one in the world cares about what happens here. I have been working here for six years in northern Syria. … There is no deterrent to the (Syrian government) and no one cares.”

Syria’s conflict began in March 2011 and has left between 350,000 and 450,000 people dead and displaced half the country’s population, including 5 million who are refugees abroad.