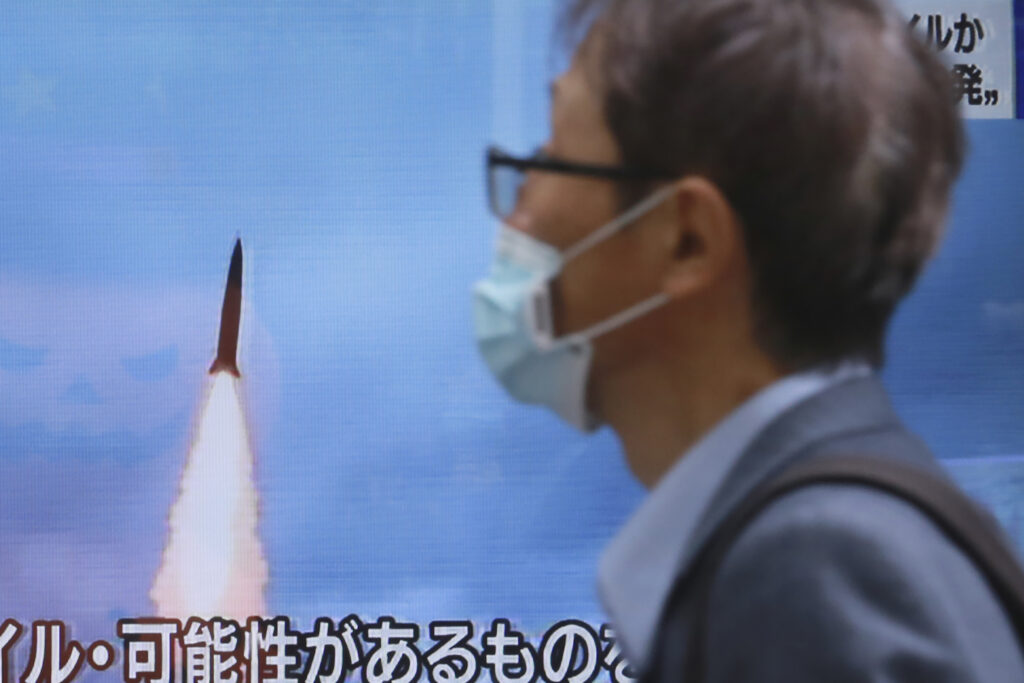 North Korea fired a submarine-launched ballistic missile (SLBM) from off its east coast on Tuesday, South Korea‘s military said, pulling Japan’s new prime minister off the campaign trail and overshadowing the opening of a major arms fair in Seoul.

The launch, reported by officials in South Korea and Japan, came after U.S. and South Korean envoys met in Washington to discuss the nuclear standoff with North Korea on Monday. Spy chiefs from the United States, South Korea, and Japan were reported to be meeting in Seoul on Tuesday as well.

The North Korean launch would be the latest weapons test by the country, which has pressed ahead with military development in the face of international sanctions imposed over its nuclear weapons and missile programs.

The missile was launched about 10:17 a.m. local time from the sea in the vicinity of Sinpo, South Korea‘s Joint Chiefs of Staff said, where North Korea keeps submarines as well as equipment for test firing SLBMs.

It was not immediately clear whether the missile was fired from a submarine or from a submersible test barge, as in most previous tests.

“Our military is closely monitoring the situation and maintaining readiness posture in close cooperation with the United States, to prepare for possible additional launches,” JCS said in a statement.

The U.S. military’s Indo-Pacific Command condemned the launch as destabilizing but assessed that it did not pose an immediate threat to the United States or its allies.

The missile flew about 430-450 kilometers to a maximum altitude of 60 kilometers, a military source said.

North Korea‘s last SLBM test was in October 2019, when a Pukguksong-3 missile was fired from an underwater platform, flying 450 kilometers to a maximum altitude of 910 kilometers.

Kim Dong-yup, a former South Korea Navy officer who is a professor at Kyungnam University’s Far East Institute in Seoul, said the latest test likely involved one of the SLBMs recently unveiled by North Korea.

The North displayed new Pukguksong-4 and Pukguksong-5 SLBMs during its military parades in October and January, respectively, and a previously unseen, smaller missile was spotted at last week’s defense fair in Pyongyang.

North Korea has also been working on what would be its first operational submarine capable of launching an SLBM, according to South Korean officials. It currently has an experimental ballistic missile submarine it claims was used in a 2016 test, though some analysts say that may have used a barge.

The Washington-based Nuclear Threat Initiative has assessed that “an operational (ballistic missile submarine) and SLBM capability could provide North Korea with additional options for nuclear launch, and a hedge against destruction of its land-based nuclear systems.”

Japanese Prime Minister Fumio Kishida said that two ballistic missiles had been detected, and that it was “regrettable” that North Korea had conducted a string of missile tests in recent weeks.

There was no immediate explanation from South Korea‘s JCS for the conflicting number of missiles detected.

Kishida cancelled scheduled campaign appearances in northern Japan, and the deputy chief Cabinet secretary told reporters that Kishida was planning to return to Tokyo to deal with the missile situation.

The launch came as the intelligence chiefs of the United States, South Korea, and Japan were due to meet in Seoul to discuss the standoff with North Korea, amid other issues, Yonhap reported, citing a government source.

The U.S. special representative for North Korea, Sung Kim, said that he would visit Seoul for talks this week.

“The U.S. continues to reach out to Pyongyang to restart dialogue,” Kim said after meeting with his South Korean counterpart in Washington on Monday. “We harbour no hostile intent towards (North Korea), and we are open to meeting with them without preconditions.”

The series of recent launches as well as the opening of the unusual military show in Pyongyang suggest that North Korea may be resuming military and international affairs after nearly two years of focusing inward amid the COVID-19 pandemic, said Chad O’Carroll, CEO of Korea Risk Group.

“North Korea‘s renewed testing of ballistic missiles suggests the worst of domestic hardship between summer 2020-2021 could be over,” he said on Twitter.

“Pyongyang tends to focus on one big strategic issue at a time, so the renewed testing could suggest military – later foreign policy – now priority.”

Last month South Korea successfully tested an SLBM, becoming the first country without nuclear weapons to develop such a system. North Korea test fired a missile launched from a train on the same day.

This month the two Koreas held dueling defense exhibitions aimed at showcasing their latest weaponry amid a spiraling arms race.

As news of Tuesday’s missile launch broke, representatives of hundreds of international companies and foreign militaries were gathered in Seoul for the opening ceremonies of the International Aerospace and Defense Exhibition (ADEX).

It is set to be South Korea‘s largest defense expo ever, organizers said, with displays of next-generation fighter aircraft, attack helicopters, drones, and other advanced weapons, as well as space rockets and civilian aerospace designs.

Though analysts say the South Korean rocket has few potential applications as a weapon, such tests are unlikely to be welcomed in North Korea, which has complained of a double standard in which its own space program is criticized overseas as a front for military missile development.