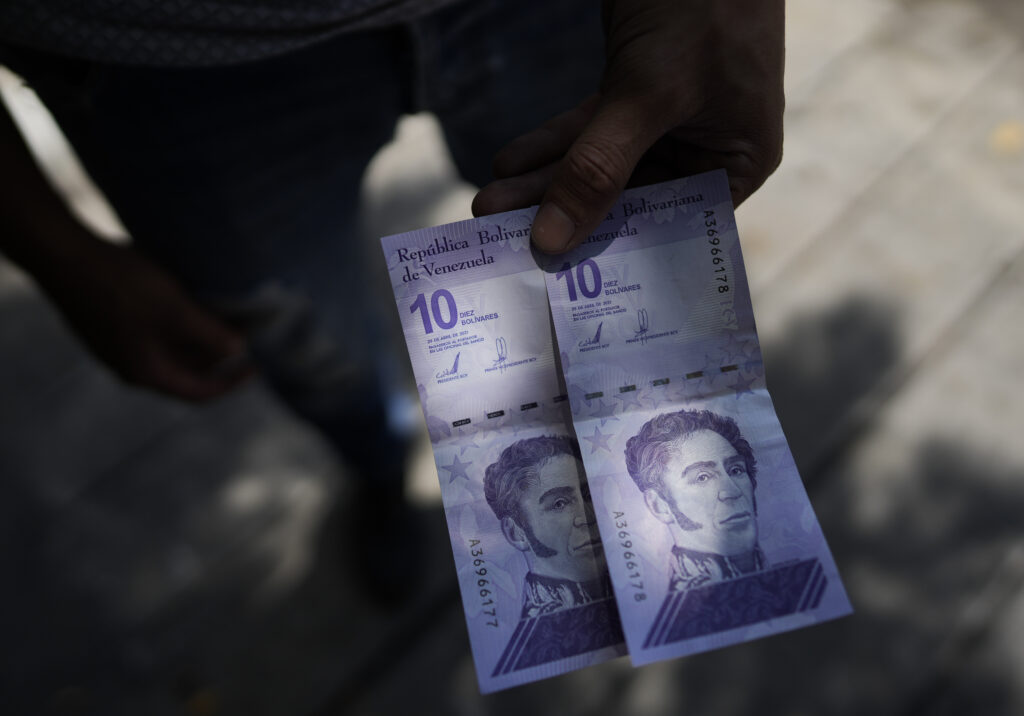 A new currency with six fewer zeros debuted Friday in Venezuela, whose currency has been made nearly worthless by years of the world’s worst inflation.

But the new bills were nowhere to be found in the capital, where consumers’ fears that prices will continue to spiral upward proved to be right.

“Today, I went to the supermarket and everything was marked in dollars,” Lourdes Pórtelo, an office worker, said in a shopping center in the east side of Caracas. “In the end, I couldn’t buy anything, I didn’t have enough money.”

Before the adjustment, the highest denomination was a 1 million bolivar bill that was worth a little less than a quarter as of Thursday. The new currency tops out at 100 bolivars, a little less than $25 — until inflation starts to eat away at that as well.

The million-to-one change for the bolivar is intended to ease both cash transactions and bookkeeping calculations in bolivars that now require juggling almost endless strings of zeros.

“The most important and fundamental reason is that the payment systems are already collapsed because the number of digits make the payment systems and doing the math practically unmanageable,” said Jose Guerra, an economics professor at the Central University of Venezuela. “These debit card payment processing systems or an accounting system for companies … are not intended for hyperinflation, but for a normal economy.”

Under the old system, a two-liter bottle of soda could cost more than 8 million bolivars — and many of those bills were scarce, so a customer might have to pay with a thick wad of paper.

Banks allowed customers to withdraw a maximum of 20 million bolivars in cash per day, sometimes less if the branch was running short.

So consumers have come to rely on U.S. dollars and digital payment methods, such as Zelle and PayPal, to make purchases. Nowadays, most transactions are made electronically, and Guerra said that more than 60% are made in U.S. dollars.

When Venezuela’s Central Bank announced the currency change last month, officials said payment systems will be modernized to expand digital use of the bolivar. They also underscored that the elimination of six zeros doesn’t otherwise affect the value of the currency. The bolivar “will not be worth more or less; it is only to facilitate its use on a simpler monetary scale,” according to a Central Bank statement.

But currency exchange differences confirmed people’s fears that prices would go up when the currency change occurred.

The price of the dollar on the black market rose Friday by more than 500,000 bolivars and stood at 5,200,000 in the previous denomination and 5.2 bolivars per dollar in the new currency. The official exchange rate increased slightly to 4,181,781.84 bolivars, but most businesses use the black market dollar as a reference for setting prices.

This is the third time Venezuela’s socialist leaders have lopped zeros off the currency. The bolivar lost three zeros in 2008 under the late President Hugo Chávez, while his successor, current President Nicolás Maduro, eliminated five zeros in 2018.

After more than four years of hyperinflation, many Venezuelans think the new bills will be short-lived as well. The central bank does not publish inflation statistics anymore, but the International Monetary Fund estimates that Venezuela’s rate at the end of 2021 will be 5,500%.

“I only had 3 million bolivars in my account, with that you don’t buy a single (piece of bread),” said Elena Díaz, a 28-year-old cleaning worker standing outside a supermarket. “When they remove the six zeros, with those 3 bolivars, I won’t be able to buy anything either.“

The use of greenbacks accelerated after Maduro’s government two years ago gave up its long and complicated efforts to restrict transactions in dollars in favor of the local currency — restrictions that only fed inflation.

Dollar bills flow into Venezuela through a network of foreign bank-account holders who charge commissions or via people traveling home with cash.

Ahead of the change, some stores already had begun to display three prices for each product, in U.S. dollars as well as new and old bolivars. By Friday morning, some had prices only in dollars.

Banks were to freeze operations for several hours between Thursday and Friday to make adjustments for the change. In Caracas, many branches did not open Friday, but according to the Superintendency of Institutions of the Banking Sector, electronic transactions were active in most banks.

Guerra, who was an adviser to a former opposition presidential candidate, said Venezuelans are now used to currency adjustments — and more may be coming unless government policies change.

“Basically, if there is no economic program to stop hyperinflation, this will happen again,” Guerra said. “The problem is that hyperinflation was so aggressive in 2018 and 2019 that the reconversion of 2018 (when five zeros were trimmed off) was lost in a year-and-a-half.”