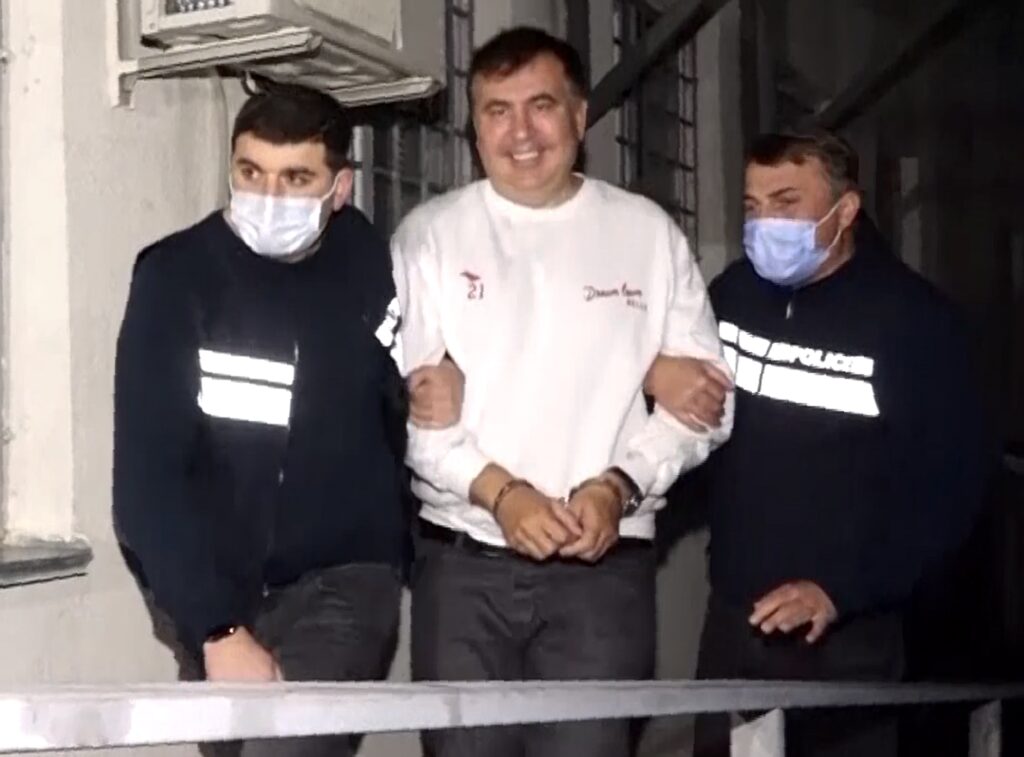 Former President Mikheil Saakashvili was arrested after returning to Georgia, the government said Friday, a move that came as the ex-leader sought to mobilize supporters ahead of national municipal elections seen as critical to the country’s political makeup.

The announcement by Prime Minister Irakli Garibashvili came about 18 hours after Saakashvili, who was convicted in absentia on abuse-of-power charges and has lived in Ukraine in recent years, posted on social media that he was back in the country.

Details of the arrest were not immediately clear, but Georgian TV on Friday evening broadcast video of Saakashvili in handcuffs, with a wide smile on his face, being taken into custody by police.

In an earlier social-media video, Saakashvili said he was in Batumi, the Black Sea port and resort that is Georgia’s second-largest city. Georgian officials earlier in the day had denied he was in the country.

In the posts, Saakashvili called said Saturday’s elections “crucial” for Georgia and had called for a rally in Tbilisi on Sunday, promising to join it.

Saakashvili’s attempts to rally Georgians could upend the ruling party’s plans to secure dominance in the balloting for mayors and local assemblies that is widely regarded as a vote of confidence in the national government and could trigger early elections next year.

The European Union brokered a deal in April to ease a political crisis between the ruling Georgian Dream party and opposition groups, including Saakashvili’s United National Movement, the second-biggest political force in the country.

The agreement stipulated that snap parliamentary elections should be called in 2022 if Georgian Dream receives less than 43% of all proportional votes in the local elections in the country’s 64 municipalities.

It is unclear whether the EU deal will be followed, however. In July, Georgian Dream withdrew from the agreement because United National Movement hadn’t signed onto it by then. The opposition party finally signed this month, and Saakashvili has urged supporters to turn out in force at the polls.

He first gained international attention in the 2003 Rose Revolution protests when he led a crowd of demonstrators that broke into a parliamentary session, forcing then-President Eduard Shevardnadze to flee; Shevardnadze, a former Soviet foreign minister, resigned a day later.

In 2017, he forced his way with a crowd of supporters into Ukraine from Poland, after his Ukrainian citizenship was rescinded.

By going back to Georgia even though he faced certain arrest, Saakashvili also echoed Russian opposition leader Alexei Navalny, who returned to Moscow from Germany in January, was arrested on arrival and later sent to prison.

Saakashvili was president in 2004-13 and was renowned for his energetic efforts against Georgia’s endemic corruption, but Georgians became increasingly uneasy with what they saw as his authoritarian inclinations and his sometimes-mercurial behavior.

Saakashvilii left the country soon after the 2013 election, in which he could not run, was won by the candidate from Georgian Dream.

In 2018, Georgian courts convicted and sentenced him to up to six years in prison.

He forced his way back into Ukraine in 2017, but was eventually deported to Poland. After Poroshenko’s successor Volodymyr Zelenskyy came to power, Saakashvili returned to Ukraine and was named to a top corruption-fighting position.

“Zelenskyy is concerned by this news,” his spokesman Serhiy Nikiforov said. “Ukraine is appealing to Georgia for explanations of all circumstances and the reasons for this move in regards to this Ukrainian citizen.”

The Georgian prosecutor’s office said a case had been opened against Saakashvili for illegally crossing the border, although the basis for such a charge is unclear because Ukrainian citizens do not need visas to enter Georgia.