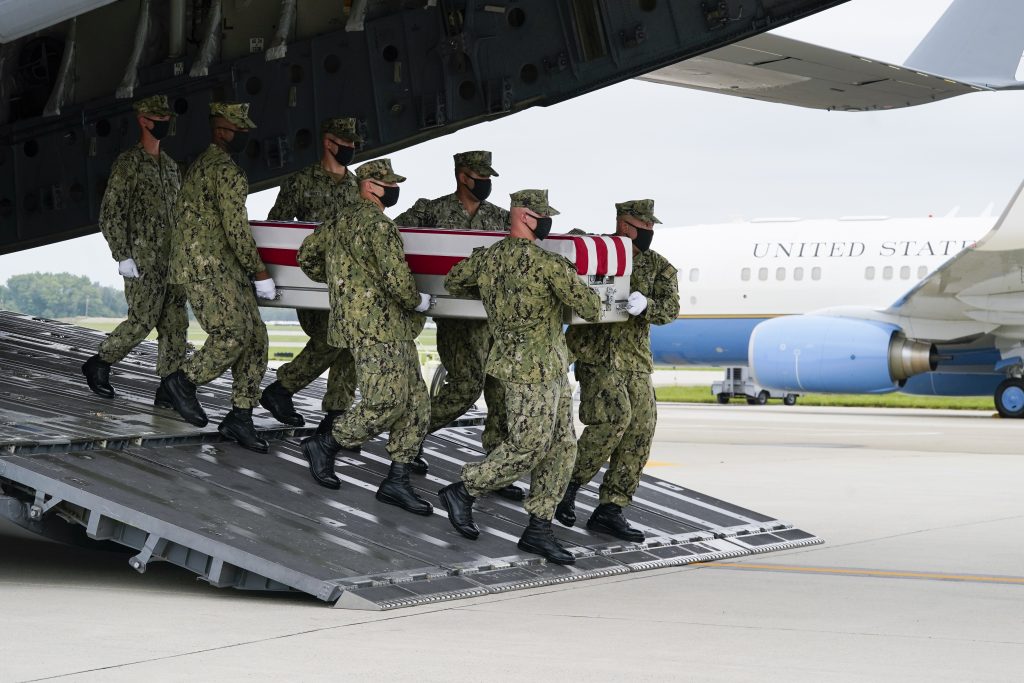 President Joe Biden met in solemn privacy Sunday with the families of the 13 U.S. troops killed in the suicide attack near the Kabul airport and became the fourth commander in chief to bear witness as the remains of the fallen returned to U.S. soil from Afghanistan.

First Lady Jill Biden joined the president at Dover Air Force Base to grieve with loved ones as the “dignified transfer” of remains unfolded, a military ritual for those killed in foreign combat.

The dead ranged in age from 20 to 31, and came from California and Massachusetts and states in between. They include a 20-year-old Marine from Wyoming who had been expecting his first child in three weeks and a 22-year-old Navy corpsman who in his last FaceTime conversation with his mother assured her that he would stay safe because “my guys got me.”

Five were just 20, born not long before the attacks of Sept. 11, 2001, that spurred the United States to invade Afghanistan in order to topple al-Qaida and dismantle their Taliban hosts who ruled the country.

At their deaths, the 13 young service members were on the ground for the U.S. coda to its longest war, assisting a chaotic evacuation of Americans and of Afghans who helped the U.S. war effort and are now fleeing the Taliban after their return to power.

“The 13 service members that we lost were heroes who made the ultimate sacrifice in service of our highest American ideals and while saving the lives of others,” Biden said in a statement Saturday. “Their bravery and selflessness has enabled more than 117,000 people at risk to reach safety thus far.”

Biden held his hand over his heart and appeared to shut his eyes in prayer as each flag-draped transfer case was taken off a military aircraft and put on an awaiting vehicle.

Family members of the fallen often travel to Dover to be present for the return of the remains of their loved ones to American soil. Thursday’s attack left so many casualties that military officials said the Dover Fisher House, which the Defense Department provides for the families of the fallen, was not large enough to accommodate all the grieving families, so some loved ones stayed off base.

The only sounds heard on the flight line were the quiet commands of honor guards who carried the transfer cases, the hum of the C-17 Globemaster II aircraft that transported the fallen, and the occasional sob of a grieving mourner.

Biden was joined by several top aides, including Defense Secretary Lloyd Austin, chairman of the Joint Chiefs of Staff Gen. Mark Milley, and Secretary of State Antony Blinken. Eleven of the fallen service members’ families chose to allow their transfers to be open to media coverage.

Biden’s three most recent predecessors as presidents all attended such dignified transfers. It was Biden’s first time taking part in the ritual as president, but he has been here before.

Biden attended a dignified transfer for two U.S. soldiers killed in a suicide blast at Bagram Airfield in the final months of his vice presidency in 2016. In 2008, while a senator and at the request of the grieving family, he attended one for a soldier killed in a car bombing in Iraq. Biden told CBS that he had to get permission from the Pentagon to attend the transfer.

The 13 troops who died in Kabul were the first U.S. service members killed in Afghanistan since February 2020. That was when the Trump administration reached an agreement with the Taliban that called for the militant group to halt attacks on Americans in exchange for a U.S. commitment to remove all American troops and contractors by May 2021. Biden announced in April that he would have all forces out by September.

Eleven of the 13 Americans killed were Marines. One was a Navy sailor and one an Army soldier.