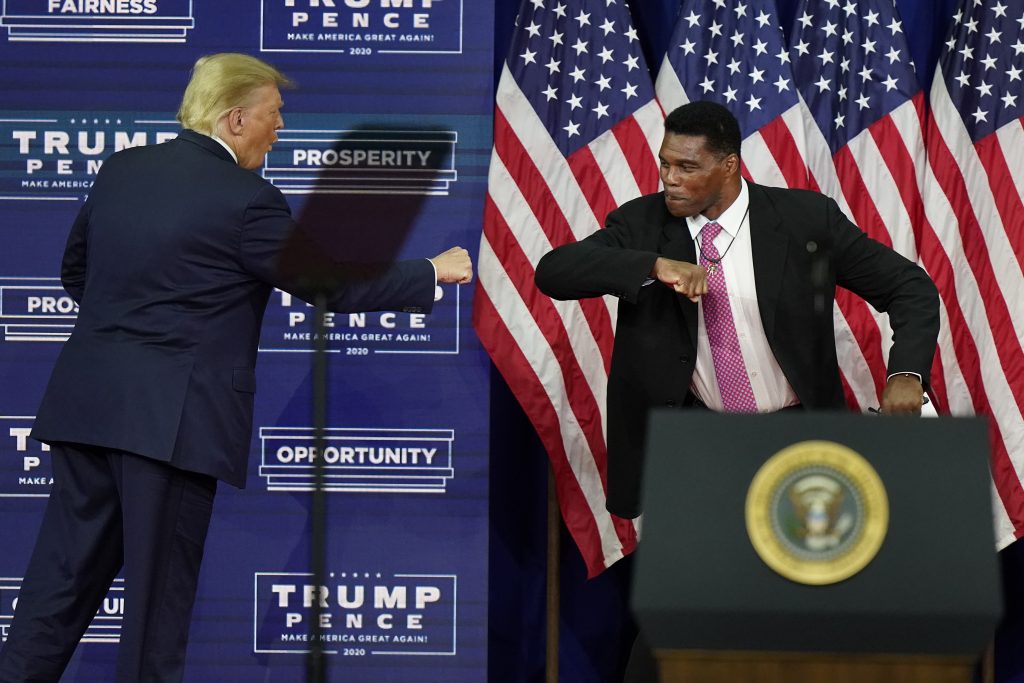 Herschel Walker “came off the sidelines” Wednesday in a Republican U.S. Senate race in Georgia with some definite advantages — including his football fame and the support of former President Donald Trump — but also with a lot of unknowns in his effort to beat Democrat Sen. Raphael Warnock in 2022.

Walker faces some key questions: Will the first-time candidate prove to be a good politician and fundraiser? What will voters make of his sometimes troubled personal history? Can Walker lure back once-Republican moderates who have fallen away from the party, and peel off some traditionally Democratic African Americans?

If Walker emerges from the Republican primary, the Senate contest would feature two Black men vying for a seat in the heart of the Deep South. First, though, Walker has to get past Republicans already running, including state Agriculture Commissioner Gary Black, former banking executive and Navy veteran Latham Saddler and contractor Kelvin King.

Walker dubbed his campaign committee Team Herschel when he declared his candidacy Tuesday with the Federal Election Commission. His foremost teammate may be Trump. Their relationship dates back to the 1980s, when Walker played for a Trump-owned team in the short-lived United States Football League. Walker spoke in support of Trump at the 2020 Republican National Convention and later attended Trump’s private birthday celebration.

Trump publicly encouraged Walker to enter the primary, telling a radio show in June that “he’s a great guy, he’s a patriot and he’s a very loyal person, he’s a very strong person. They love him in Georgia, I tell you.”

With Trump the “defining figure” in today’s GOP, Bullock said his backing might be all Walker needs.

“If he tells them they need to go out and vote for Herschel Walker, that’s the strongest endorsement he can possibly get,” Bullock said.

But the former president’s support could be a liability in a general election in closely divided Georgia.

“By the end of this long, divisive, and expensive intra-party fight, it’ll be clear that none of these candidates are focused on the issues that matter most to Georgians,” Georgia Democratic Party spokesperson Dan Gottlieb said in a statement.

Walker could share a Republican ticket with Gov. Brian Kemp, a frequent target of Trump attacks, as Kemp seeks reelection. Trump has vowed vengeance against Kemp, saying he didn’t do enough to overturn Trump’s election loss.

It’s unclear if that enmity would damage Republican chances, with Democrats possibly fielding a united ticket of Warnock and Stacey Abrams. Walker endorsed Kemp in Kemp’s 2018 victory over Abrams.

Warnock has already raised $10.5 million for the 2022 race but has downplayed Walker’s entry. He’s now traveling the state promoting a jobs agenda.

“And I hear there’s a race next year,” Warnock told the Atlanta Press Club last week when asked about Walker.

Walker has been living outside Dallas and is making his first run for office.

Walker’s past could also weigh on his campaign.

An Associated Press review of public records uncovered detailed accusations that Walker repeatedly threatened the life of his ex-wife, and while Walker denied the accusations, a judge granted a protective order in 2005 and for a time barred Walker from owning guns.

Walker has more recently made outsized claims about his business success. He repeatedly claimed his company employed hundreds of workers and grossed $70 million or more in annual sales.

But Walker’s company reported just eight employees when it applied for a federal Paycheck Protection Program loan last year. In a recent court case, Walker said his company averaged about $1.5 million a year in profit from 2008 to 2017.

State election officials opened an investigation into his wife’s residency after The Atlanta Journal-Constitution reported that records show Blanchard voted in Georgia despite living in Texas. Walker registered to vote last week at the Atlanta house Blanchard owns and registered his campaign Tuesday at the same address.