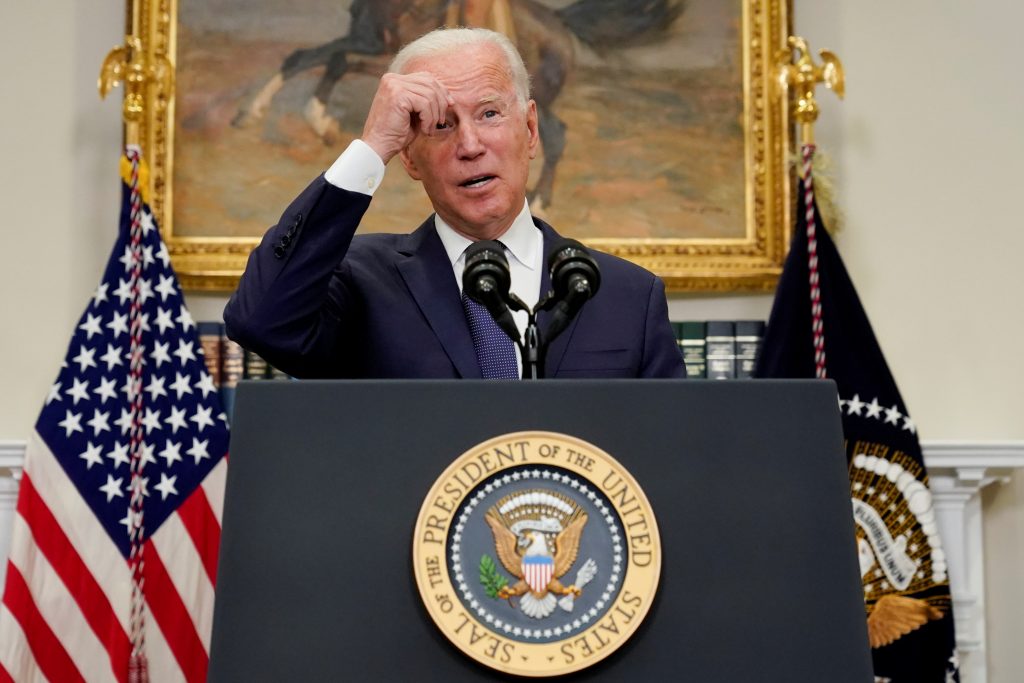 President Joe Biden will stick to a Pentagon recommendation to remove U.S. troops from
Afghanistan by Aug. 31 so long as the Taliban enables the United States to complete its evacuations, three U.S. officials told Reuters on Tuesday.

Biden sent thousands of U.S. troops to the Kabul airport after the Taliban militant group took over the city and much of the country less than two weeks ago.

The nearly 6,000 U.S. troops are helping to evacuate American citizens and at-risk Afghans and to protect the airport
so other countries can evacuate their citizens as well.

The Pentagon made the recommendation that Biden stick to his Aug. 31 target date on Monday, the officials said.

Biden accepted the recommendation but asked the Pentagon to make contingency plans to stay longer if necessary, one official said.

The date was dependent on completing the mission and the Taliban’s cooperation, the official said.

The official said the United States has been in regular contact with the Taliban and officials are telling the group
that the timeline is contingent on Taliban cooperation.

Biden sent CIA Director William Burns to meet Taliban leader Abdul Ghani Baradar in Kabul on Monday in the highest level official encounter since the militant group took over the Afghan capital, a U.S. official and a source familiar with government activity told Reuters on Tuesday.

A congressional source said Burns and Baradar had discussed the Aug. 31 date.

The Pentagon recommendation reflects increasing security concerns at the Kabul airport, where American citizens and at-risk Afghans are being evacuated.

Two U.S. officials, speaking on the condition of anonymity, said that there was increasing concern about suicide bombings by Islamic State militants at the airport.

One official said it was no longer a question of if, but when, militants would attack and the priority was to get out
before it happened.

Biden was set to speak later on Tuesday.

The Pentagon earlier said that it was confident the military can evacuate all Americans who want to leave. Whether thousands of at-risk Afghans would all be evacuated was unclear.

“We’re absolutely still aiming towards the end of the month,” Pentagon spokesman John Kirby said, while adding that
the Pentagon may need additional bases to house evacuees from Afghanistan.

Afghanistan’s new Taliban rulers said on Tuesday they wanted all foreign evacuations from the country completed by Aug. 31 and they would not agree to an extension as Group of Seven leaders met to discuss the crisis.

Western troops have been working frantically to get foreigners and Afghans onto planes and out of the country and
Biden has faced growing pressure from allies to negotiate more time for the airlift.

The Taliban expect foreign evacuations from Kabul to be completed by the end of the month, the Islamist group’s main spokesman said on Tuesday, urging Afghans to stay to help rebuild their country.

Zabihullah Mujahid said the movement had not agreed to an extension of an Aug. 31 deadline which he said had been agreed with the United States to pull out of Afghanistan, and he said the group wanted all evacuations to end by that date.

“The extension was unilateral by the side of the United States,” he said, apparently referring to a comment by Biden last week that U.S. troops may stay beyond Aug 31.

“It was a violation of the agreement. We want them to evacuate all foreign nationals by August 31,” Mujahid said, according to his translator. “And we are not in favour of allowing Afghans to leave.”

A U.S. administration official said on Tuesday that Biden had accepted a Pentagon recommendation to remove U.S. troops from Afghanistan by the end of the month, but that the decision was contingent on whether the Taliban cooperates in helping the United States complete evacuations.

It was not clear whether the Taliban spokesman’s comment indicated that there would be a formal ban on Afghans leaving the country.

He said crowds thronging outside the airport could go home and their security would be guaranteed and he called on the United States not to encourage educated and trained Afghans to leave their country.

Mujahid repeated that the Taliban wanted good diplomatic relations with other countries and wanted foreign embassies to remain open.