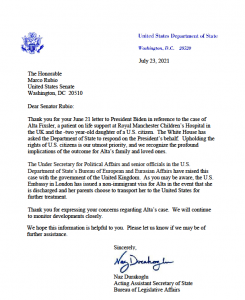 The United States State Department sent a letter to Senator Marc Rubio (R-Fla.) on Friday, July 23, stating that it has communicated with the government of the United Kingdom concerning the case of Alta Fixsler, a 2-year-old Jewish child hospitalized in England who is brain damaged and who the courts have ordered to be removed from life support.

Her parents have been fighting the ruling, and want to bring her to the United States where she could continue her treatment.

On June 21, 10 Republican Senators, led by Rubio, signed a letter to President Biden requesting he intervene in the case, and on June 25, Senator Charles Schumer sent a letter to Karen Pierce, the British Ambassador to Washington, informing her that he was working on obtaining a visa for Alta, which was ultimately obtained. Alta’s advocates in the Jewish community and in the U.S. and Israeli governments are seeking to have her transferred her to the U.S. or Israel for treatment, but the British authorities have said she is suffering pain and her life support should be terminated.

The State Department letter, written by Naz Durakoglu, Acting Assistant Secretary of State for Bureau of Legislative Affairs, states that “upholding the rights of U.S. citizens is our utmost priority, and we recognize the profound implications of the outcome for Alta’s family and loved ones. The Under Secretary for Political Affairs and senior officials in the U.S. Department of State’s Bureau of European and Eurasian Affairs have raised this case with the government of the United Kingdom.”