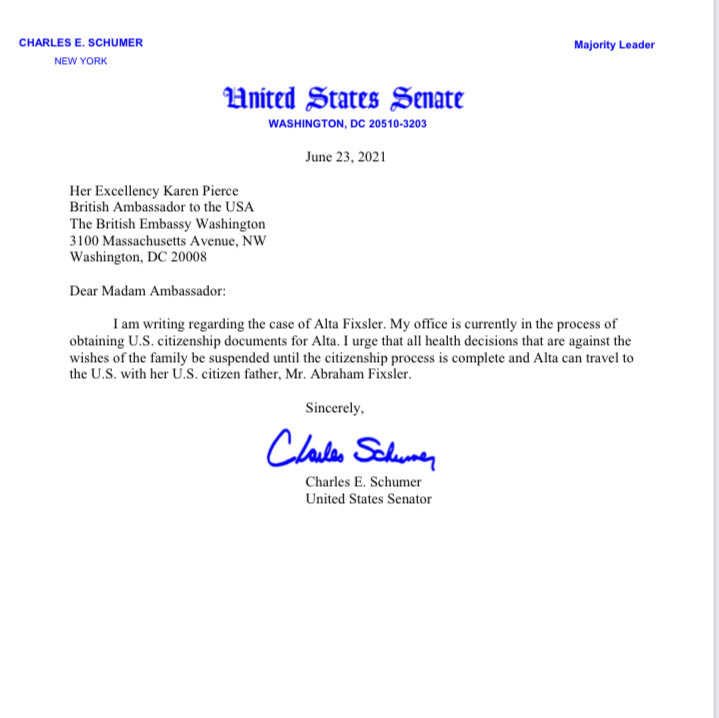 U.S. Senate Majority Leader Charles Schumer is intervening in the case of Alta Fixsler, a brain-damaged, 2-year-old Jewish girl in the U.K. at risk of being removed from life support by a hospital in Manchester against her family’s will.

Alta’s family has waged a battle to keep her alive. Her mother is an Israeli citizen, and her father an American. If Alta is unable to remain on life support in the U.K., the family is hoping to at least be able transport her to Israel or America for treatment.

Jewish activists have been working on getting the Israeli and U.S. governments involved in the case, to either pressure the British to keep Alta on life support or transport her to one of those countries.

Schumer is working on obtaining U.S. citizenship papers for Alta, an on Wednesday — the same day a British judge heard an appeal by her parents to keep her on life support — Schumer sent a letter to Karen Pierce, the U.K. ambassador to the U.S., urging Pierce “that all health decisions that are against the wishes of the family be suspended until the citizenship process is complete and Alta can travel to the U.S.”

On Monday, 10 Republican senators sent a letter to President Joe Biden asking him to “advocate to Prime Minister Johnson on behalf of the Fixsler family.”