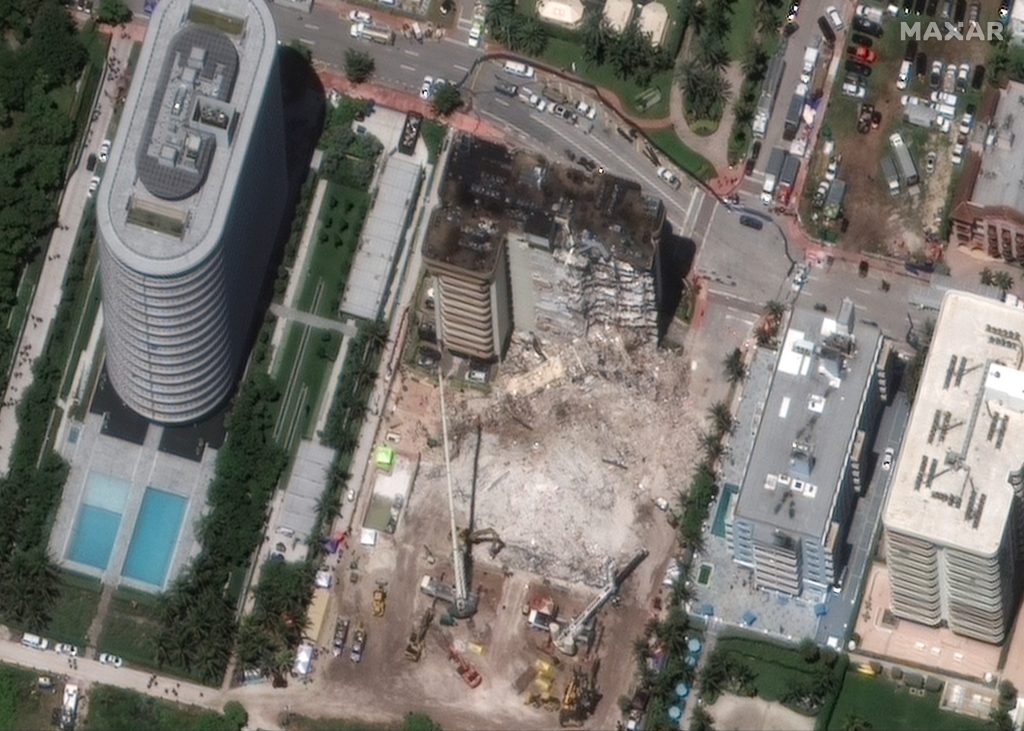 Rescue crews made way for demolition teams at the site of a collapsed South Florida condo building as officials shifted their focus to bringing down the unstable remainder of the structure ahead of a tropical storm.

The search and rescue mission was suspended Saturday afternoon so workers could begin the precarious business of boring holes to hold explosives in the concrete of the still-standing portion of the Champlain Towers South tower in Surfside, Miami-Dade Assistant Fire Chief Raide Jadallah told relatives awaiting word on missing loved ones.

Jadallah said the suspension was a necessary safety measure because the drilling could cause the structure to fail. If that were to happen, he said, “It’s just going to collapse without warning.”

But in a video stream of Jadallah’s closed-door briefing to relatives of the missing, one of them was heard calling it “devastating” that the search was on pause. She asked whether rescuers could at least work the perimeter of the site so as not “to stop the operation for so many painful hours.”

While the demolition operation carried risks, officials said it could not be avoided with Tropical Storm Elsa looming in the Caribbean and forecast to hit the state by Tuesday morning. The storm heightened concerns that the remaining structure could fall, endangering the crews below and complicating the search.

The confirmed death toll from the June 24 collapse stood at 24, but 121 people were still unaccounted for.

“We have a building here in Surfside that is tottering. It is structurally unsound,” Gov. Ron DeSantis said Saturday. “And although the eye of the storm is not likely to pass over this direction, you could feel gusts in this area.”

The building won’t come down until Monday at the earliest, according to Jadallah. That estimate was based on how many holes the demolition team needs to drill, he said, adding that the process has to move slowly to prevent a premature collapse.

Miami-Dade police will go door-to-door to evacuate residents in surrounding buildings in advance of the demolition, Surfside officials said. No one will be allowed in the buildings to the immediate north and south of the collapsed structure.

Miami-Dade Mayor Daniella Levine Cava said officials would resume the search and rescue effort on any sections of the pile that are “safe to access as soon as we are cleared.”

Once the structure is demolished, the remnants will be removed immediately with the intent of giving rescuers access for the first time to parts of the garage area that are a focus of interest, Jadallah said. That could give a clearer picture of voids that may exist in the rubble and could possibly harbor survivors.

No one has been rescued alive since the first hours after the collapse.