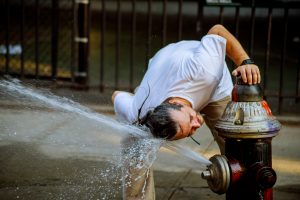 Mayor Bill de Blasio is asking New Yorkers to “urgently, urgently” reduce electricity usage, as the city experiences power outages and is at risk of further disruption as a heat wave scorches the Northeast.

“Our electric system is dealing with real strains right now because of the severity of heat that we are experiencing today, and, obviously, after four days in a row of intense heat,” the mayor said at a hastily called press conference at City Hall Wednesday afternoon with Emergency Management Commissioner John Scrivani.

The mayor asked that throughout Wednesday people avoid using air conditioning when possible, or at least set the temperature higher, and  avoid using appliances like washers, dryers, and microwaves.

Shortly after the press conference, cellphones around the city screeched as the Emergency Alert system was activated, issuing a the request to all New Yorkers.

There are currently about 1,700 customers without power in the Williamsburg/Greenpoint area, as well as “some other localized outages in each borough,” Scrivani said. Officials are hopeful that energy reductions will prevent further outages.

Con Edison is distributing dry ice at the corner of Nassau Avenue and Morgan Avenue in Greenpoint, and the city has also brought an MTA bus to serve as a mobile cooling center at the same location.

The city’s regular cooling centers are open as well; locations can be found at this map or by calling 311.

The heat wave is expected to break Wednesday night. According to weather.com, the temperature in Brooklyn will drop into the 70’s around midnight, with thunderstorms.

Thursday is expected to be rainy, with a high of 83 degrees and a low of 69.

“When you wake up in the morning,” de Blasio said, “we expect things to be much more normal, and you can go about your normal activities.”