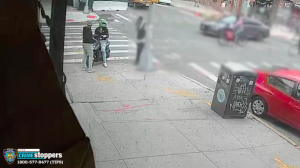 A Jewish man in Williamsburg was harassed and robbed last week by assailants on motorcycles.

On June 2, around 4:10 p.m., three unknown men on motorcycles approached a 21 -year-old Jewish man in front of 685 Metropolitan Avenue. They made anti-Semitic comments to their victim and demanded money from him.

The victim tried to call 911, and one of the men on motorcycles grabbed his yarmulke and then all fled northbound on Manhattan Avenue.

NYPD crime stoppers released surveillance video on June 11. The incident took place under the jurisdiction of the 94th precinct.