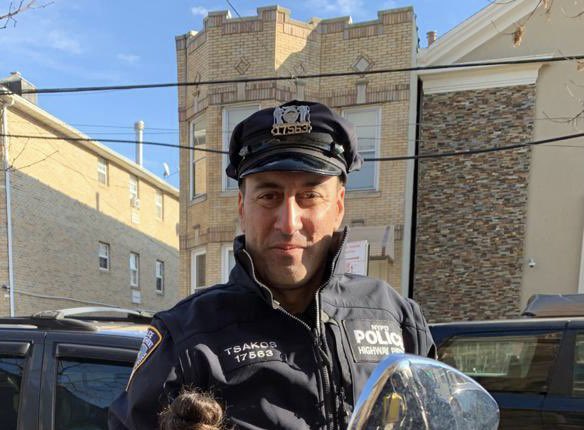 A New York City police officer was fatally struck by a hit-and-run driver early Tuesday as he was directing traffic away from the scene of an earlier deadly crash, police said.

Officer Anastasios Tsakos, 43, was on the Long Island Expressway in Queens just before 2 a.m. when he was struck by a car driven by a woman who was intoxicated and driving with a suspended license, Police Commissioner Dermot Shea said at a news conference.

Shea said the driver who struck the officer, a 32-year-old woman from Hempstead, was arrested soon after and faces charges up to vehicular manslaughter. Her name was not immediately released.

The fallen officer was a 14-year veteran of the police department who leaves a wife and two young children, officials said.

Mayor Bill de Blasio, who joined Shea and other police officials at the hospital where doctors had tried to save Tsakos’ life, said he had spoken to the officer’s widow, Irene.

“A few hours ago she was looking forward to seeing her husband again and now she won’t,” the mayor said. “He leaves behind a six-year-old daughter, a three-year-old son. They will never see their father again because somebody did the wrong thing.”

Tsakos was assisting officers at the scene of an earlier crash in which the driver hit a utility pole, Shea said. A rear passenger in that car was killed, and the car burst into flames.

Shea said officers who arrived at the scene “encountered a car that was on fire. They rushed toward that car, broke a window and pulled people out of the car.”

De Blasio said the driver of that car was also driving recklessly and with a suspended license. “We see here a horrendous pattern,” the mayor said. “People doing the wrong thing and other people dead because of it, and one of them a hero officer who did everything right in his life for us, and he is dead because of other people’s negligence.”

Shea and Pat Lynch, the head of the Police Benevolent Association, said Tsakos was a favorite among the officers in his highway unit.

Shea said members of Tsakos’ unit “describe him as the best of the best, describe him as a person that would never ask why, just, ‘What do you need done?'”

Lynch said the two highest compliments a police officer can bestow on a fellow officer are “he’s a cop’s cop” and “he’s a good guy.”

“You heard them both in this emergency room,” Lynch said. “Yes, he was a good guy.”