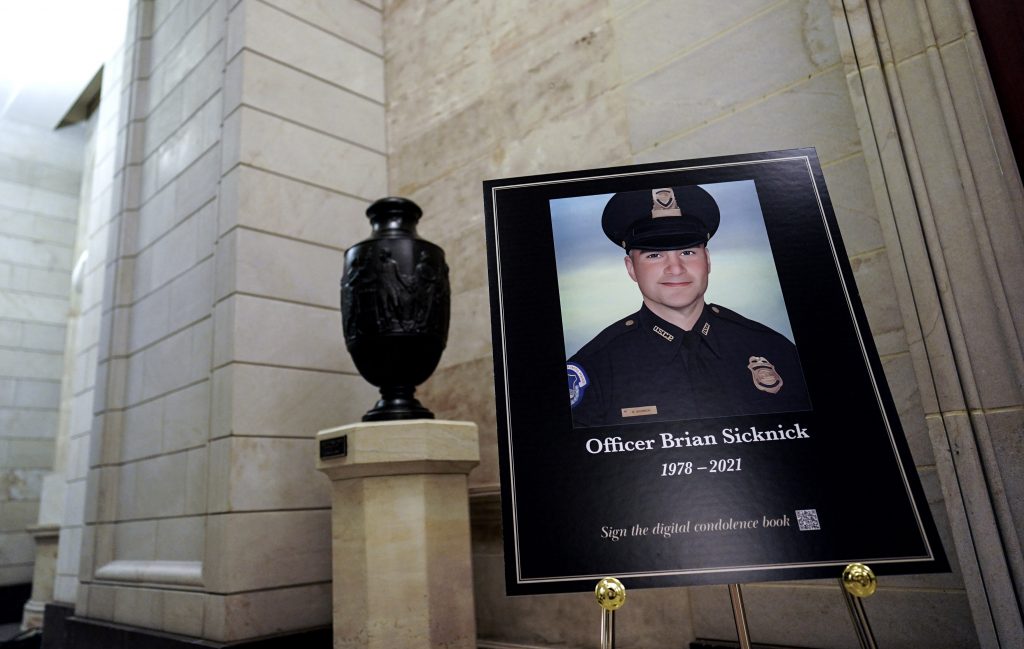 Capitol Police officer Brian Sicknick suffered two strokes and died a day after he confronted rioters at the Jan. 6 insurrection, the District of Columbia’s chief medical examiner has ruled.

The ruling, released Monday, probably will make it difficult for prosecutors to pursue homicide charges in the officer’s death. Two men are accused of assaulting Sicknick by spraying a powerful chemical irritant at him during the siege.

In an interview with The Washington Post, Francisco Diaz, the medical examiner, said the autopsy found no evidence that the 42-year-old officer suffered an allergic reaction to chemical irritants, which Diaz said would have caused Sicknick’s throat to seize. Diaz also said there was no evidence of internal or external injuries.

The medical examiner noted that Sicknick was among the officers who engaged the Capitol mob, and he said “all that transpired played a role in his condition.”

Sicknick collapsed after returning to his office during the riot and died about eight hours later, on Jan. 7.

Diaz said Sicknick suffered two strokes at the base of the brain stem caused by a clot in an artery that supplies blood to that area of the body. Diaz said he could not comment on whether Sicknick had a preexisting medical condition, citing privacy laws.

Sicknick was among hundreds of officers who confronted the violent mob that took over the Capitol, seeking to overturn the election President Donald Trump had lost.

In early February, the officer, who grew up in South River, N.J., was honored at the U.S. Capitol. His remains were interred at Arlington National Cemetery.

Police said Sicknick, who joined the Capitol Police in 2008, collapsed after he had returned to his office following the riot and was taken to a hospital, where he died. The case is being investigated by D.C. police, who handle deaths in the city, along with the Capitol Police and the FBI.

Jeffrey Rosen, acting U.S. attorney general at the time, said in a Jan. 8 statement that Sicknick died of “the injuries he suffered defending the U.S. Capitol.” He promised that local and federal authorities would “spare no resources in investigating and holding accountable those responsible.”

The Capitol Police had previously said in a statement that Sicknick “was injured while physically engaging with protesters.”

Christopher Geldart, D.C.’s acting deputy mayor for public safety, said Monday the medical examiner’s office “took the appropriate amount of time to evaluate all the evidence” in Sicknick’s death, which he said including reviewing videos, statements from officers and the results of toxicology screens.

Geldart said Diaz “felt he was able to make this call in good conscience.”

In March, two men were accused of assaulting Sicknick with chemical spray during the riot. At the time of the arrests, the autopsy had not been completed.

Julian Elie Khater, 32, of Pennsylvania and George Pierre Tanios, 39, of Morgantown, W.Va., grew up together in New Jersey, authorities said.

Arrest papers say Khater and Tanios were at the Lower West Terrace of the Capitol at 2:14 p.m. on Jan. 6, where Sicknick and other officers were standing behind metal bicycle racks.

About nine minutes later, those documents say, after Khater said he had been sprayed with something, Khater is seen on video discharging a substance into the face of Sicknick and two other officers.

In a statement after Sicknick died, his family said, “Brian is a hero and that is what we would like people to remember.” The family said that at that time, the “direct causes” of his injuries were unknown.

Sicknick grew up in a New Jersey borough south of New Brunswick, the youngest of three brothers. He is survived his siblings, Ken and Craig, his parents Charles and Gladys Sicknick, and his companion of 11 years, Sandra Garza.

Sen. Cory Booker, D-N.J., paid tribute to Sicknick on the Senate floor on Jan. 19, saying the officer understood “that wearing that uniform, wearing that badge, that you had a sacred duty to protect this sacred space.”

The senator described Sicknick’s death as a “crime” that “demands the full attention of federal law enforcement.” He said that “when white supremacists attacked our nation’s capital, they took the life of one of our officers. They spilled his blood, they took our son away from his parents. They took a sibling away from their brothers.”

Sicknick joined the New Jersey Air National Guard in 1997 and had been assigned to the 108th Air Refueling Wing at Joint Base McGuire-Dix-Lakehurst in New Jersey. The National Guard said he deployed to Saudi Arabia in 1999 and to Kyrgyzstan in 2003.

Although Sicknick supported Trump, those who encountered him said his political views did not align neatly with one political party. Messages he sent to his congressman, Rep. Don Beyer, D-Va., were “polite and measured,” according to the lawmaker’s spokesman. He opposed impeachment for Trump and favored gun control. He was concerned about animal cruelty and the national debt.

During the ceremony in February honoring Sicknick at the Capitol, fellow officers, lawmakers, and President Joe Biden and first lady Jill Biden paid their respects. On Jan. Senate Majority Leader Chuck Schumer, D-N.Y., described Sicknick as a “peacekeeper, not only in duty but in spirit.”