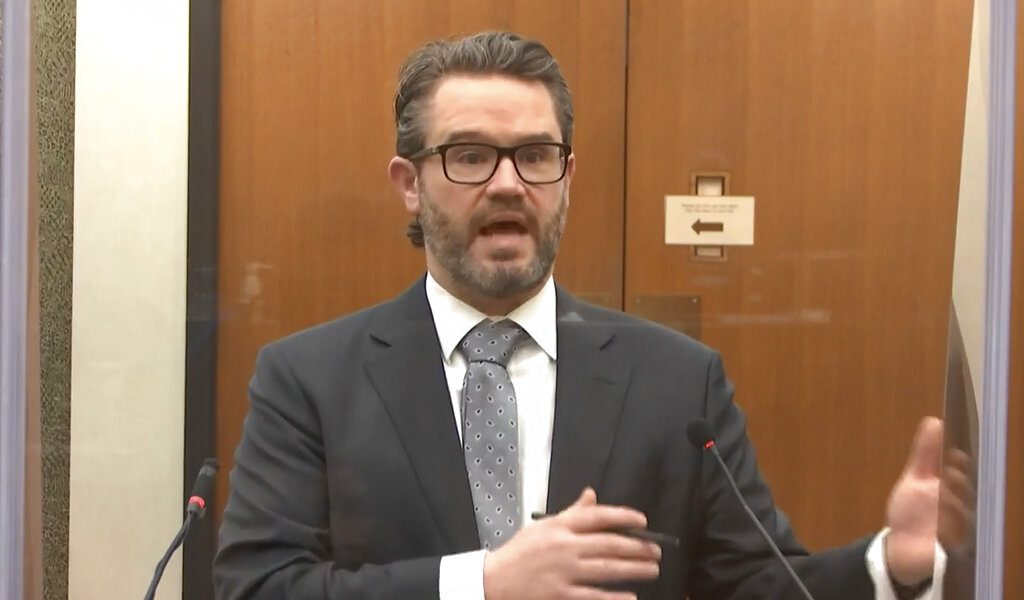 The defense began its case Tuesday at the murder trial of former Officer Derek Chauvin, seizing on a 2019 confrontation between police and George Floyd in which Floyd suffered dangerously high blood pressure and confessed to heavy use of opioid painkillers.

Chauvin lawyer Eric Nelson has argued that Floyd died last May because of his illegal drug use and underlying health problems, not because of Chauvin pinning him to the pavement.

Moments after the prosecution rested its case Tuesday following 11 days of testimony and a mountain of video evidence, the defense put on its first witness, a retired Minneapolis police officer who testified about a May 6, 2019, incident in which Floyd was arrested, a year before his fatal encounter with Chauvin.

Scott Creighton said he drew his gun when Floyd, a passenger in a car, did not comply with orders to show his hands. Nelson played body camera video that showed Creighton approaching on the passenger side, drawing his gun and pulling Floyd out.

Another witness who responded to that call, retired paramedic Michelle Moseng, testified that she recommended taking Floyd to the hospital based on his high blood pressure, which she measured at 216 over 160, but he resisted.

Medical experts for the prosecution testified previously that Floyd died of lack of oxygen because his breathing was constricted as police held him down on his stomach, his hands cuffed behind his back. The experts rejected the notion that his drug use, high blood pressure or heart disease caused his death.

In fact, on Monday, Dr. Jonathan Rich, a cardiology expert from Northwestern Memorial Hospital in Chicago, testified: “Every indicator is that Mr. Floyd had actually an exceptionally strong heart.”

Chauvin’s lawyer introduced the 2019 arrest to show what he portrayed as a pattern of behavior on Floyd’s part.
Body-camera footage from the day Floyd died shows two officers approaching a panicked Floyd, who says, “I’m not a bad guy!” and struggles, begging not to be put in a squad car. Drugs were later found in Floyd’s SUV and in the squad car.

Law enforcement experts and veteran Minneapolis police officials, including the police chief himself, testified that Chauvin’s knee on Floyd’s neck for as much as 9 1/2 minutes was excessive and contrary to his training and departmental policy.

Nelson hasn’t said whether Chauvin will take the stand. Testifying could open him up to devastating cross-examination but could also give the jury the opportunity to see any remorse or sympathy on the officer’s part.