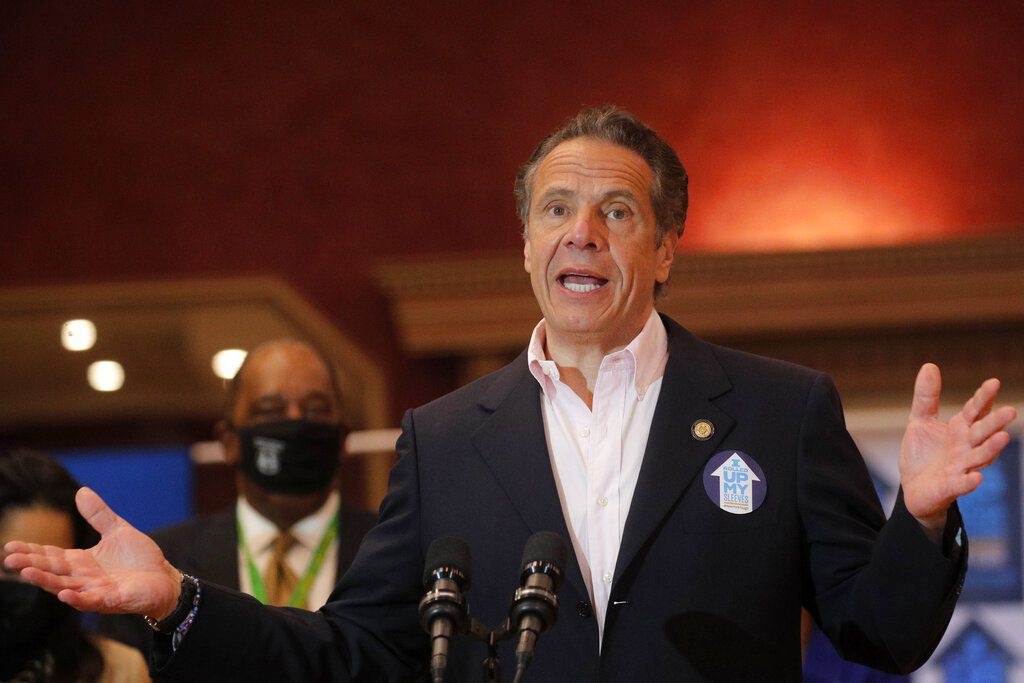 New York will boost spending by billions over the next year in a bid to revitalize the state’s hard-hit economy under a late spending plan that failed to pass in time Tuesday to prevent more delayed paychecks for state workers.

Gov. Andrew Cuomo has long prided himself on getting the budget passed within a few days of an April 1 deadline and trying to keep spending increases minimal. Lawmakers narrowly met the budget deadline last spring at the start of the pandemic, when the Assembly and Senate didn’t offer their own spending proposals.

The late-starting, drawn-out budget negotiations this year meant that Cuomo had to sign legislation Tuesday evening to extend this fiscal year’s budget by two days.

The legislation makes sure the state can afford to pay workers, but the delayed budget process means thousands of state workers may have to wait at least a day longer than usual to receive their paychecks. At least 39,000 state employees are expecting a paycheck Thursday, state comptroller spokesperson Jennifer Freeman said.

The Legislature and governor waited until late Tuesday to release specifics to the public about some of the most contentious parts of the budget, from a tax hike on millionaires, to an agreement to legalize mobile sports betting, to a $2.1 billion fund for undocumented immigrants and other workers who have been excluded from COVID-19 assistance.

Lawmakers typically have to wait three days to pass legislation once it’s introduced. But the governor can give lawmakers special permission to vote on the bill earlier.

Democrats hope the tax increase on millionaires will bring in at least $2.8 billion this upcoming year, while a corporate tax rate hike could bring in another $750 million.

“Working and middle-class taxpayers will receive the relief they desperately need, while the wealthiest New Yorkers will help their neighbors,” Democratic Senate Leader Andrea Stewart-Cousins said in a statement. “This budget makes New York better for all.”

“This immense tax burden will drive more New Yorkers out of the state, joining the 1.4 million former residents who have fled to other states over the last decade,” Justin Wilcox, executive director of Upstate United, an advocacy group representing business and trade groups, said.

Mobile sports betting could bring in another $99 million that New York would direct to education funding, according to lawmakers who hope that could jump to $500 million by 2026. New York’s gaming commission would seek bids for companies who would run the state’s mobile sports betting program, and New York would boost spending on addiction treatment for problem gaming and sports programs for underserved young people.

Meanwhile, New Yorkers who weren’t eligible for federal COVID-19 stimulus payments or unemployment aid will be able to apply for one-time unemployment benefits under the new $2.1 billion fund. Workers could prove eligibility with a foreign birth certificate or a U.S. high school diploma, for example.

New Yorkers, regardless of immigration status, could apply for help from a new $2.4 billion rental relief program that will offer 12 months of overdue rent and utilities, three prospective months of rent and a year of eviction protection. That’s on top of $600 million in homeowner assistance.

That increase is due in part to extra federal COVID-19 relief that New York won’t get again next year, including an expected $12 billion for state government alone.

New York tax revenues are rebounding faster than expected. Congress has sent billions to New York over the past year and Cuomo has reduced state spending by at least $1.7 billion since last spring. That’s all helped New York balance its budget.

But Cuomo and Democrats want to give a jumpstart to an economy still hit by job losses from the COVID-19 pandemic. Employment in New York is still more than one million jobs below pre-pandemic levels, with fewer than half of lost jobs recovered so far, according to state Comptroller Tom DiNapoli.

“[W]e not only balanced our budget, we are also making historic investments to reimagine, rebuild and renew New York in the aftermath of the worst health and economic crisis in a century,” Cuomo said.

Cuomo and lawmakers said the budget would include a “record” $29.5 billion in school aid, a $3 billion increase from last year.

That includes $1.4 billion in additional aid for school funding, and a $105 million expansion of full-day pre-kindergarten for 210 districts who don’t currently receive such state funding. New York is set to prevent tuition increases at state colleges and universities for the next three years and boost funding for tuition assistance and operating aid.

The budget also provides funding for “green economy investments,” child care and small business recovery. That includes $11.2 billion for transit systems and highway improvements, $2.4 billion for child care assistance and providers, a $3 billion bond to fund environmental and climate change projects, $35 million in tax credits for restaurants, and $40 million in grants for arts and cultural organizations. It also includes a requirement for every internet provider in New York to offer low-income families a $15-per-month plan.