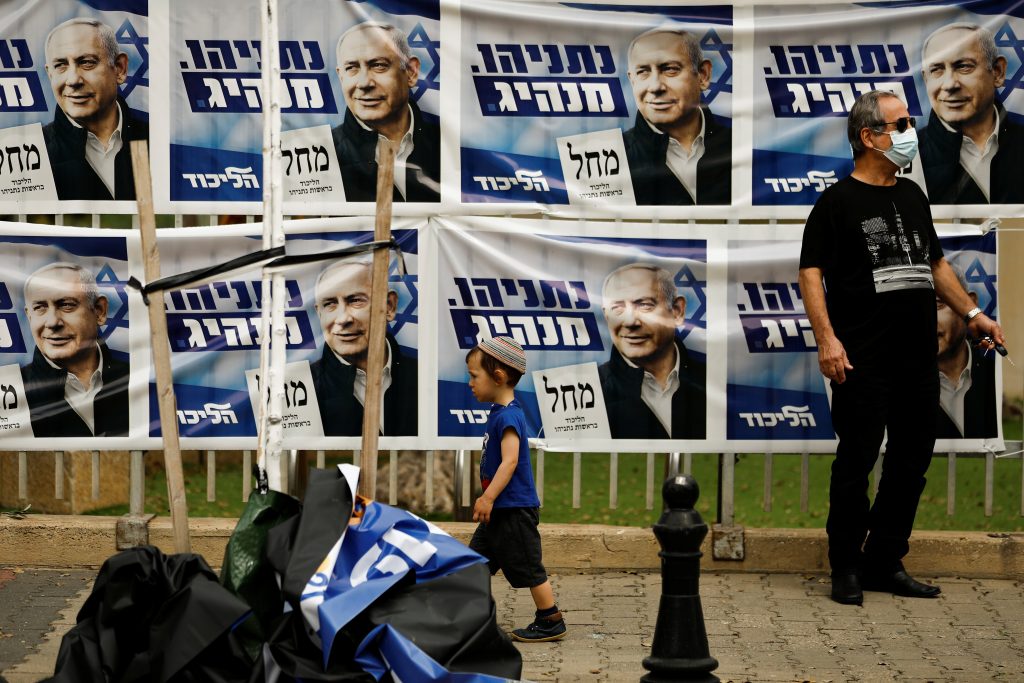 With headlines saying that the turnout is the lowest since 2009, and many Israelis seen enjoying themselves at the beaches and the shopping malls (recently reopened), politicians were rolling out their Election Day panic appeals for their supporters to go to the polls before it’s too late.

“And what’s happening in Likud strongholds? Ashkelon, Beersheva, Ashdod, Tiberias, Jerusalem, Kiryat Shmona — why is turnout low? Go vote [Likud] now or you’ll get [Yair] Lapid, a rotation and another election. Two more seats to [Likud] and we win,” the party said, referring to the last election polls.

Netanyahu told Karmiel Mayor Moshe Kuninski in an Election Day call: “Voting percentages in Likud are not good enough. I am asking all the Likudniks — go and vote Likud, we are down two seats. The press is trying to put us to sleep, to tell us it’s in the bag. I’m telling you, it’s not in the bag, but it’s close. We must wake up the Likud strongholds, to get the people out, whether it’s getting them out of the house or out of the cafes and restaurants — it’s all good, thanks to the vaccinations we brought.”

Religious Zionism party leader Bezalel Smotrich sent out a video message tailored for the time of year: “We’re seeing low turnout in our areas, apparently because of Passover cleaning. Cleaning is important, but go vote,” he urged.

Not unexpectedly, there was an ugly side to the day’s proceedings, as Yisrael Beytenu chair Avigdor Liberman was warning his supporters that the chareidim “rushing to the polling stations,” mimicking a controversial tactic employed in 2015 by Netanyahu against Arabs.

However, the chareidi parties UTJ and Shas were also said to be affected by the generally low turnout, estimating it to be 3% lower than last year in chassidic areas, according to The Times of Israel.

The Yesh Atid and Blue and White parties were squabbling over the latter’s fate. Yesh Atid leader Yair Lapid claimed that his party’s private polls show that Blue and White and Meretz were assured of clearing the electoral threshold, and there was no longer any need for his supporters to cast their votes for them to shore up the opposition bloc. Now, he said, they could vote for him.

The response from Blue and White was less than friendly:

“Lapid is lying, the danger has not passed,” a party representative said, according to Channel 12.

There have been lighter moments during the day as well.

Like all Israelis, Netanyahu was asked to lower his mask so that election officials at the polling station could verify that he was the person his ID card. “It’s me,” he said to laughter.