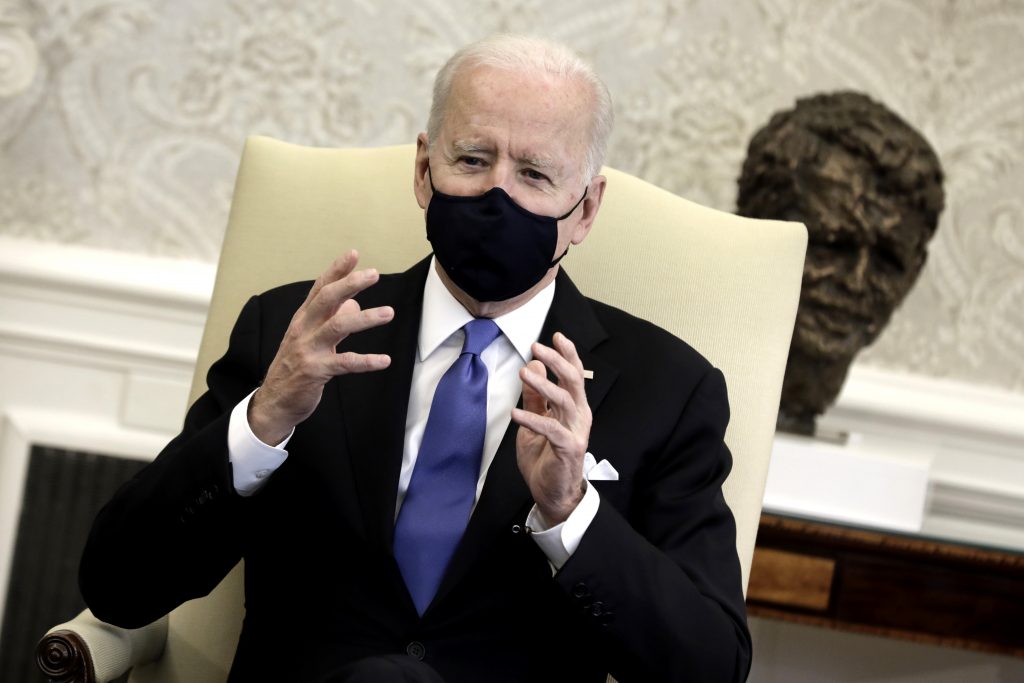 The executive action taken Sunday directs federal facilities to accept requests from states — which run their own voter processes — to become registration sites, and calls for a modernization of the Vote.gov website.

The effort aims “to make it easier for eligible voters to register to vote, and improve access to voting,” Biden said in taped remarks to the annual Martin and Coretta Scott King Unity Breakfast.

Biden’s push comes amid heated debate over voter access, inflamed by a 2020 election that saw a record number of ballots cast, as well as a sizable uptick in mail-in voting in response to the coronavirus pandemic.

President Donald Trump, defeated by Biden in November, repeatedly blamed his loss on widespread fraud, an effort to cast doubt on the electoral system that culminated in the Jan. 6 insurrection at the U.S. Capitol.

Since then, GOP lawmakers have promoted state-level efforts to make registration requirements more stringent, and to reduce mail-in and early voting. In a Feb. 28 speech to the Conservative Political Action Conference, his first since leaving the White House, Trump said “we need one election day, not 45,” and derided the “insanity” of mail-in voting.

Democrats have argued that such measures are intended to disenfranchise poor and minority voters who are less likely to have additional documentation — such as drivers licenses — or be able to take off work to vote on Election Day itself.

Biden said an “all-out assault on the right to vote” is happening now” with more than 250 bills introduced in state legislatures across 43 states to “make it harder for Americans to vote.”

House Democrats this month passed a sweeping election-reform bill that would mandate same-day voter registration and an expansion of early voting. But that effort seems doomed to failure in the Senate, where the filibuster means Democrats would need to recruit 10 Republicans to back the bill. Trump called the bill a “monster” that “cannot be allowed to pass.”

Democrats have also sought to restore elements of the Voting Rights Act. That follows the Supreme Court’s move in 2013 to strike down a key provision requiring states and local governments with a history of discrimination to get pre-clearance from the federal government before enacting changes to voting procedures.

And this month, the conservative-leaning Supreme Court heard arguments on another voting-rights case that could free state legislatures to make more changes to voting laws.

Biden on Sunday said he hopes the Senate passes the House legislation so he can sign it into law, and call on Congress “to fully restore the Voting Rights Act.”

The executive order also calls for the Pentagon to give service members an opportunity to register to vote or update their information, and asks agencies to examine how they might allow federal employees the option to take leave to vote or volunteer as poll workers. And the Biden administration will examine ways to improve voting access for eligible federal prisoners, as well as Native Americans.

The impact of the order will depend on how many Americans take advantage of new registration and voting opportunities that might result. A senior administration official said the effort represented the extent of what the president can accomplish unilaterally.

Biden unveiled the action on the anniversary of the 1965 Bloody Sunday civil rights march in Selma, Alabama.

“Those torches and burning crosses, the batons, tear gas, fire hoses, attack dogs, and unfair laws and trials could not stop progress,” Biden said in his remarks.