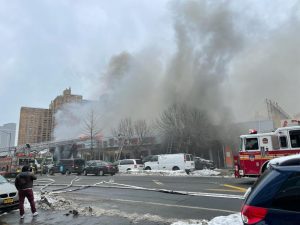 A massive fire ripped through a local mechanics shops being used by the Jewish-owned car rental service Buggy on Empire Boulevard in Crown Heights on Monday morning, sending smoke billowing into the air.

The 3-alarm fire required 140 firefighters to extinguish, ABC7 reported. Witnesses said they heard explosions and the fire grew rapidly after, burning through the lot and the cars.

According to reports, the fire started at approximately 10:30 a.m. on Empire between Rogers and Bedford, at one of Buggy’s locations.

The fire was ignited by a gasoline space heater.  The chemicals in the store makes the smoke from the flames toxic and people were urged to stay away.

Firefighters arrived to tackle the blaze and transmitted a Third Alarm, as they encountered difficulty with frozen or out of service hydrants.

A foam unit was brought in, and by 11:40 a.m. the main fire in the Buggy building was extinguished, and firefighters moved on to smaller fires.

With reporting by CrownHeights.info