The residents of the Golan Heights woke up Wednesday to the rare sight of a thick layer of snow covering the ground as the storm set to move toward Yerushalayim.

Emergency, rescue and medical services were gearing up for a massive winter storm that hit the country late Tuesday and is set to last through Thursday, bringing snow to Yerushalayim for the first time in several years.

Some communities in the upper part of the Golan were covered in 15 cm (6 inches) of snow in the early morning hours, while those in the lower parts so far received between 3-5 cm of snow, which continues to pile up. 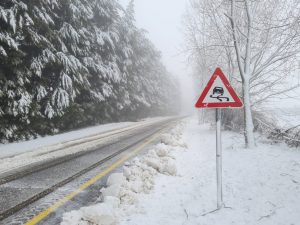 Police said major roads in the area have been closed to traffic while schools in the Golan to remain shut due to weather conditions.

The snow began on the highest peaks around midnight and spread to the rest of the heights overnight.

Temperatures are expected to drop during the course of the day across the country as flood warnings were issued in coastal and low-lying areas.

Wind gusts are expected to reach between 80 to 100 kilometers per hour (50-62 miles per hour), and waves are forecast to reach 8 meters (26 feet) meters in height.

The Water Authority said the water level in the Kinneret has risen by 1.5 cm since Tuesday and now stands at 209.56 meters below sea level, with the upper level missing another 76 cm of water.

Authorities said that schools in Yerushalayim will remain open Wednesday.

The Education Ministry, meanwhile, said it will suspend all outdoor activities and shut schools in areas impacted by snow or flooding but said it will monitor the situation on the ground and adjust its decisions accordingly and in consultation with local authorities.

UTJ: We Won’t Sign Without Detailed Agreement on Religion and State

IDF Soldier Sentenced to 10 Days in Jail for Political Remark