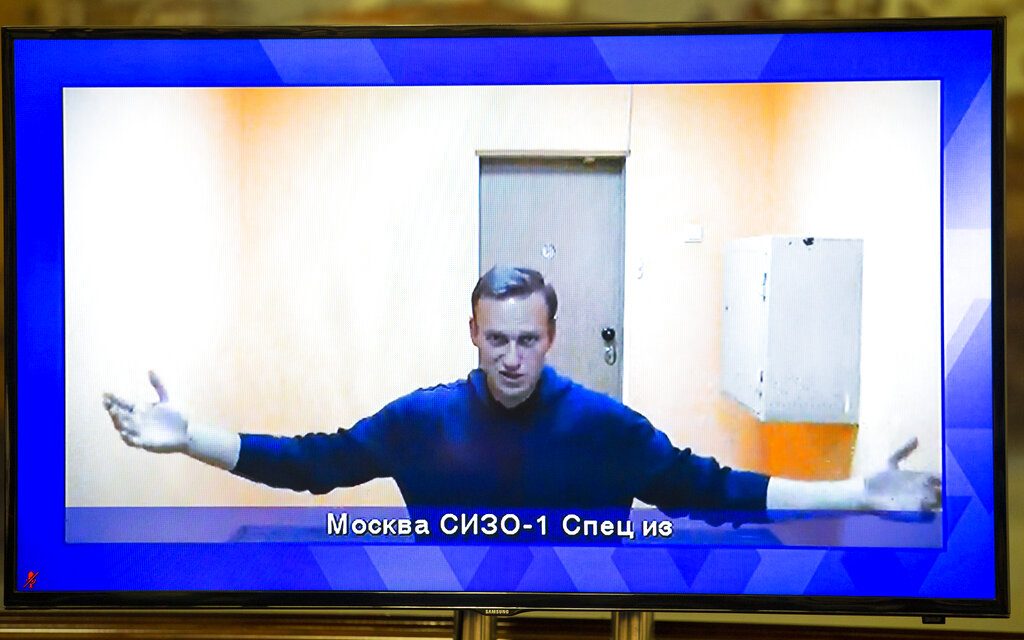 A Russian court on Thursday rejected opposition leader Alexei Navalny’s appeal of his arrest while authorities detained several of his allies and issued warnings to social media companies after tens of thousands swarmed the streets in over 100 Russian cities last weekend demanding his release.

Appearing in court by video link from jail, Navalny denounced criminal proceedings against him as part of the government’s efforts to intimidate the opposition.

“You won’t succeed in scaring tens of millions of people who have been robbed by that government,” he said. “Yes, you have the power now to put me in handcuffs, but it’s not going to last forever.”

The 44-year-old Navalny, the most well-known critic of President Vladimir Putin’s government, was arrested Jan. 17 upon returning from Germany, where he spent five months recovering from nerve-agent poisoning that he blames on the Kremlin. Russian authorities have rejected the accusations.

Navalny was arrested and jailed for 30 days at the request of Russia’s penitentiary service, which charged that he had violated the probation terms of his suspended sentence from a 2014 money-laundering conviction that rejected as politically driven. He is also currently facing accusations in two separate criminal probes.

Before the Moscow Region Court rejected the appeal of his recent arrest, defense lawyers argued that while undergoing rehabilitation in Germany, Navalny could not register with authorities as required by the probation terms. His lawyers also charged that Navalny’s due process rights were repeatedly violated during his arrest.

Navalny described his jailing following an earlier court hearing quickly held at a police station as a mockery of justice.

“It was demonstrative lawlessness intended to scare me and all others,” he told the Moscow court.

Navalny’s supporters are organizing another round of rallies for Sunday. Police on Wednesday searched Navalny’s apartment, a rented accommodation where his wife, Yulia, has been living and the residences of several of his associates and supporters.

Navalny’s brother, Oleg Navalny, his top ally, Lyubov Sobol and Dr. Anastasia Vasilyeva from the Navalny-backed Alliance of Doctors were detained for 48 hours as part of a criminal probe into alleged violations of coronavirus regulations during last Saturday’s protests.

Putin spokesman Dmitry Peskov said the searches and detentions were a legitimate part of police efforts to investigate the alleged violations during the events.

Demonstrations calling for Navalny’s release took place in more than 100 cities across the nation last Saturday, a strong show of rising anger toward the Kremlin. Nearly 4,000 people were reported detained at those protests and some were handed fines and jail terms.

Speaking during Thursday’s court hearing, Navalny thanked his supporters and said, “They are the last barrier preventing our country from sliding into the degradation.”