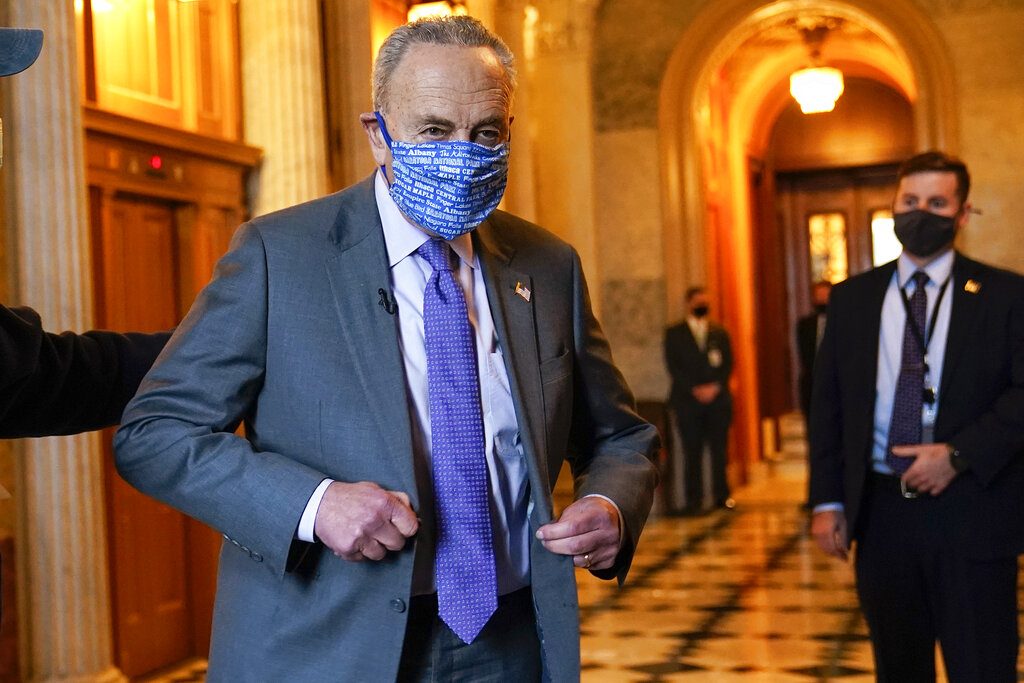 Easing off a stalemate, the Senate moved forward Tuesday with a power-sharing agreement in the evenly-split chamber after Republican leader Mitch McConnell backed off his demand that Senate Democrats preserve the procedural tool known as the filibuster.

The stand-off between McConnell and new Senate Majority Leader Chuck Schumer had all but ground the Senate to a halt in the early days of the Democratic majority and threatened President Joe Biden’s agenda. Schumer refused to meet McConnell’s demands.

“I’m glad we’re finally able to get the Senate up and running,” Schumer said Tuesday as he opened the chamber. “My only regret is it took so long because we have a great deal we need to accomplish.”

While the crisis appeared to have resolved, for now, the debate over the filibuster — the procedural tool that requires a 60-vote threshold to advance most legislation — is far from over.

Progressive Democrats see the tool as an outdated relic that can be used by the minority Republican Party under McConnell to derail Biden’s agenda, and they want to do away with it. They point to the way the filibuster was wielded during the 20th century to stall civil rights legislation, and warn of a repeat.

Democrats control 50 votes in the split chamber, with Vice President Kamala Harris as a tie-breaking vote, and Biden’s allies would typically need Republican senators to reach the 60-vote threshold to advance Democratic priorities on COVID-19 relief, immigration or other issues.

Even as he dropped his demand, McConnell warned Tuesday of all the ways the Senate business could still be tied in knots if Democrats try to press on with plans to pursue changes to the filibuster.

“They would guarantee themselves immediate chaos,” McConnell warned. “Destroying the filibuster would drain comity and consent from this body to a degree that would be unparalleled in living memory.”

Usually a routine matter, the organizing resolution for the chamber became a power play by McConnell once Democrats swept to control after the Jan. 5 special election in Georgia and the new senators took the oath of office after Biden’s inauguration on Jan. 20.

McConnell had been holding up the organizing agreement, which divides up committee assignments and other resources, as he tried to extract a promise from Schumer of no changes to the filibuster.

Schumer would not meet the Republican leader’s demands, but McConnell said late Monday he had essentially accomplished his goal after two Democratic senators said they would not agree to end the filibuster. Without their votes, Schumer would be unable to change the rules.

“With these assurances, I look forward to moving ahead with a power-sharing agreement modeled on that precedent,” McConnell said in a statement.

He was referring to West Virginia’s Joe Manchin and Arizona’s Kyrsten Sinema who have expressed reservations about doing away with the tool.

Schumer’s office said the Republican leader had no choice but to set aside his demands.

“We’re glad Sen. McConnell threw in the towel and gave up on his ridiculous demand,” said Justin Goodman, a spokesman for the Democratic leader. “We look forward to organizing the Senate under Democratic control and start getting big, bold things done for the American people.”