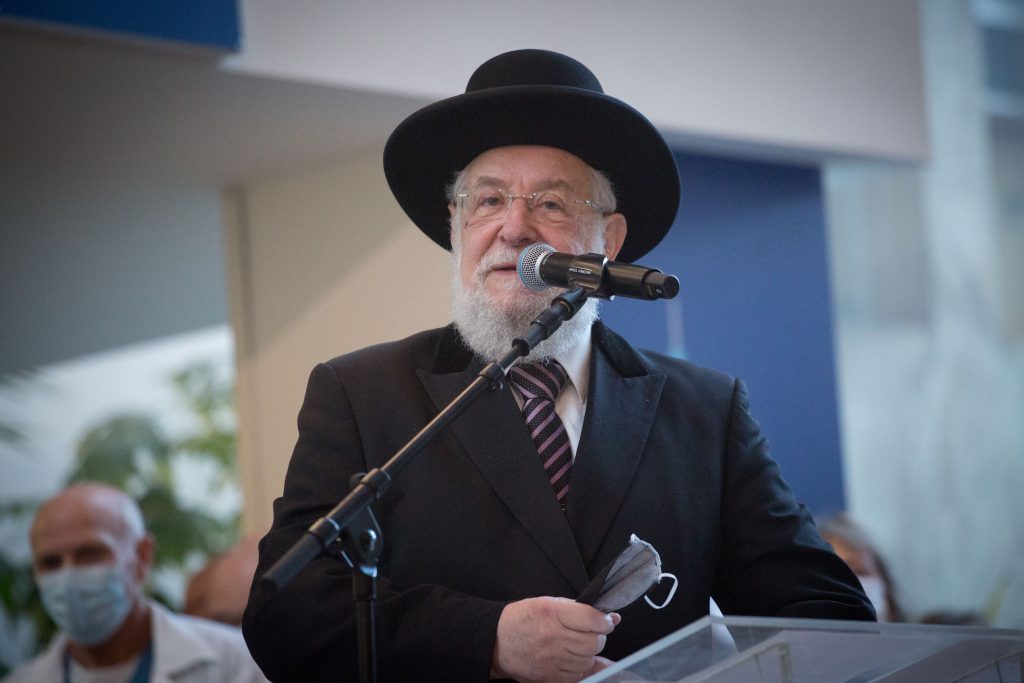 Former Ashkenazi Chief Rabbi Yisrael Meir Lau, 83, has tested positive for coronavirus, days after he received the second dose of the coronavirus vaccine.

Rabbi Lau was reportedly feeling well and did not have any symptoms.

It was not immediately known when he was infected with the virus, but it may well have been prior to receiving the second dose, as the virus usually takes some time to show up in tests, or before the vaccine became fully effective.

The Pfizer-BioNTech vaccine which is being used in Israel is around 52% effective after the first dose, which is expected to increase to about 95% a number of days after the second dose.

According to a tweet from his grandson, Rabbi Lau was believed to have contracted the virus from his wife who herself caught it a week earlier. There were no details given on her condition.

Rabbi Lau was vaccinated on the first day of the national rollout of the vaccine and urged members of the chareidi community to get inoculated.

“You must not be afraid,” he said at the time. “Vaccination is an obligation for all of us.”

Meanwhile, in response to criticism over Israel’s deal with Pfizer to disclose to the company details about the country’s vaccination campaign in exchange for early and widespread use of the firm’s inoculation, the Health Ministry published the full agreement on its website.

The decision comes to allay allegations that the privacy of those who get immunized will be violated in the information exchange.

The ministry says Pfizer agreed to the publication of the document, parts of which have been redacted for “commercial and other reasons.”

In the coming days, the Israel Prison Service will begin vaccinating all inmates against COVID-19, following a directive by Attorney General Avichai Mandelblit.

Israeli and international rights groups, including Amnesty International, have issued public calls for Israel to vaccinate the estimated 4,400 Palestinian security prisoners held in its jails.

Health Minister Yuli Edelstein announced last week that vaccine doses would be distributed to prisons over the coming days.