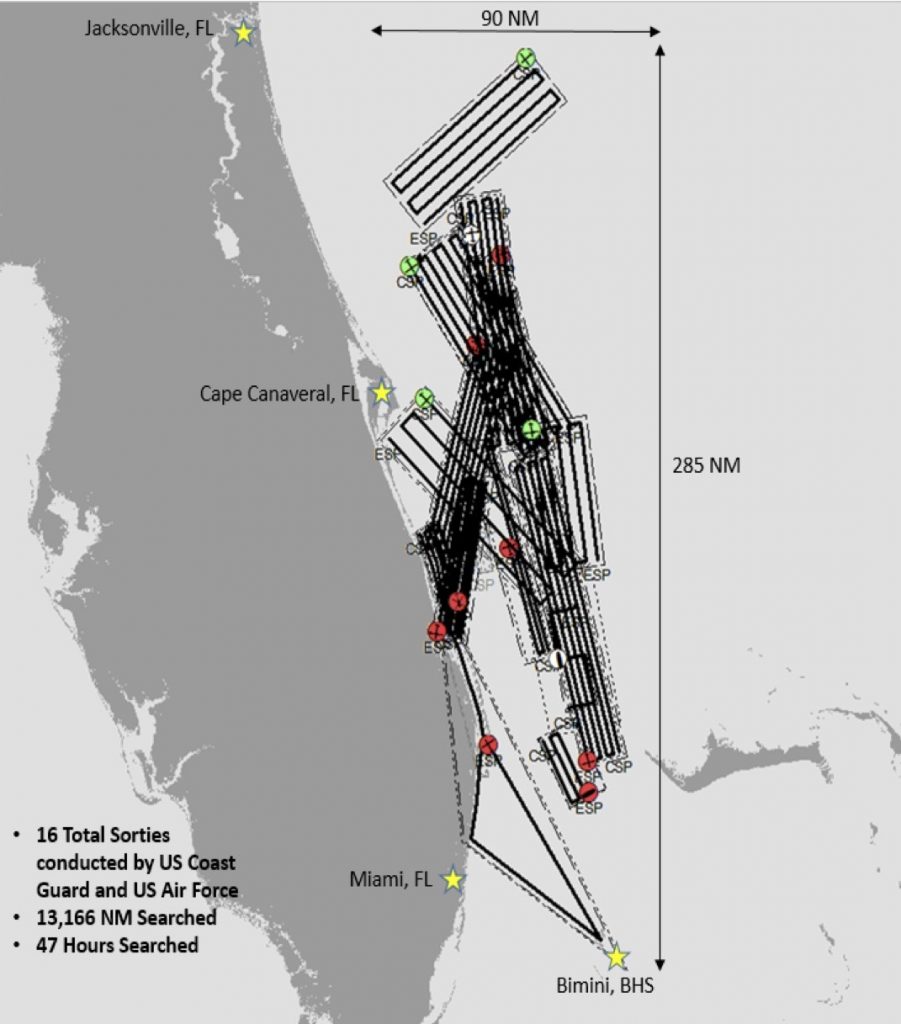 The first sign something was wrong came Tuesday when Bahamian authorities reached out to the U.S. Coast Guard’s Southeast Division to alert them that 20 people aboard a blue and white 29-foot Mako Cuddy Cabin vessel had gone missing. The passengers were in the oft-cited Bermuda Triangle.

The group, yet to be identified, was last known to have left Bimini on Monday en route to Lake Worth, the Coast Guard learned. They should have arrived that day.

But something went wrong somewhere in the waters between the Bahamas and South Florida — an area that encompasses the mythical section of the Atlantic oft-dubbed the Bermuda Triangle or Devil’s Triangle, unofficially bounded by Miami, Bermuda and Puerto Rico and covering about 500,000 square miles of ocean off the southeastern tip of Florida, according to the History Channel.

On Friday, after searching for about 84 hours and more than 17,000 square miles — roughly double the size of Massachusetts, the Coast Guard said — rescuers that included Air Station crews from Miami and Clearwater suspended their search.

“Our thoughts and prayers go out to the families of the missing people,” Capt. Stephen V. Burdian of the Seventh District said in a statement. “I encourage anyone with information about the people aboard to contact us as soon as possible.”

“The hardest thing is that the longer it takes to find somebody, the longer they can be drifting,” Hernandez told the station.

In addition to an HC-144 Ocean Sentry aircrew from Miami and a C-130 Hercules aircrew from Clearwater and the U.S. Air Force, Coast Guard cutters Robert Yered and Margaret Norvel, as well as the Royal Bahamas Defense Force surface units and Bahamas Air Sea Rescue Association air assets and Patrick Air Force Base air asset were in on the search.

Though the Bermuda Triangle has been made fanciful through media, novels and pop songs after the mysterious disappearance of dozens of ships and airplanes over the years, experts have long maintained “these mysterious disappearances do not occur more frequently in that stretch of the Atlantic than in other well-traveled sections of the ocean,” the History Channel said.

Still, theories abound: Pirates. Space aliens. Even explanations grounded in science but without evidence like “oceanic flatulence — methane gas erupting from ocean sediments — and disruptions in geomagnetic lines of flux,” according to the National Oceanic and Atmospheric Administration.

“The U.S. Navy and U.S. Coast Guard contend that there are no supernatural explanations for disasters at sea. Their experience suggests that the combined forces of nature and human fallibility outdo even the most incredulous science fiction,” according to NOAA.