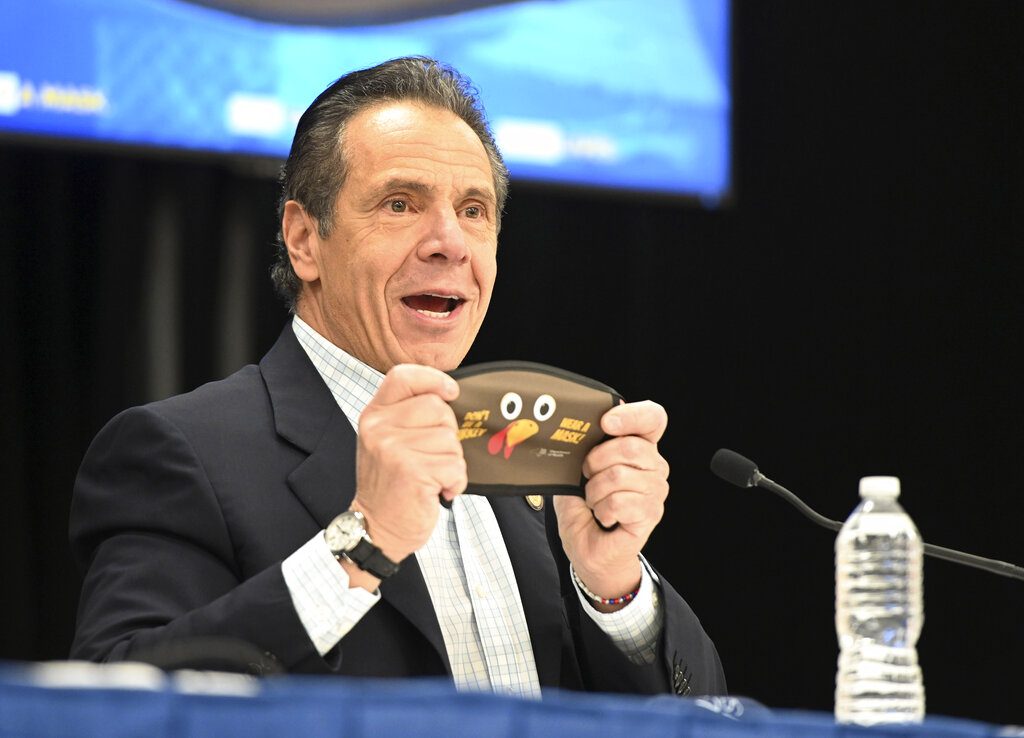 New York Gov. Andrew Cuomo warned of a post-Thanksgiving uptick Wednesday that could stress hospitals across the state, which has recorded the highest seven-day average of new COVID-19 cases since late April.

New York recorded 6,265 new positive cases Tuesday, the highest for a single day since April 24. About 3% of tests over the past week have come back positive, more than double the rate a month ago.

New infections have been on the rise in New York this fall, and state and county public health officials say Halloween parties have helped fuel the latest surge this month. Hospitalizations rose to nearly 3,000 COVID-19 patients as of Tuesday. The state has averaged 2,599 patients daily over the past seven days, an 82% increase from compared to 1,428 two weeks ago.

“This is where I think if we’re going to get in trouble, you’re going to see it in a few days, seven days after this Thanksgiving weekend, you’ll start to feel the number,” Cuomo said at a news conference Wednesday in Rochester.

The state averaged 5,599 new cases each day over the past seven days. That’s up 56% from two weeks ago, and more than triple the average as of four weeks ago.

Cuomo has tried to control the spread of COVID-19 by imposing restrictions on hot spots in neighborhoods around the state and officials have warned people to stay home and avoid large Thanksgiving gatherings. Cuomo himself reversed course and canceled plans to celebrate Thanksgiving in person with his 89-year-old mother.

“Focus on the people closest to you and small gatherings and virtual gatherings and avoid travel to keep everyone safe, it makes such a difference,” New York City Mayor Bill de Blasio said at his daily news briefing.

Cuomo has shuttered schools and certain nonessential businesses and banned indoor dining in designated orange zones in parts of the suburbs north of the city, central and western New York and on Staten Island, where he has reopened an emergency field hospital.

Cuomo’s plan primarily looks at the percentage of tests coming back positive in a particular area, as well as evidence of community spread. Cuomo said Wednesday that he wants to update his plan for the winter to consider hospitalization rates.

“We have to prioritize hospital beds,” he said. “We have to make sure we don’t overwhelm hospitals.”

New York City schools have been closed to in-person learning since Nov. 19. De Blasio said it won’t be until next week that the city puts out a plan for reopening them, which will be done in phases over the following weeks. The mayor had promised to have such a plan in place before Thanksgiving.

De Blasio also highlighted an initiative called “Shop Your City” that encourages New Yorkers to do their holiday shopping at small businesses, which have been hit hard by pandemic-related closures. The city is also providing economic support to small businesses, including 0% loans of up to $100,000, he said.