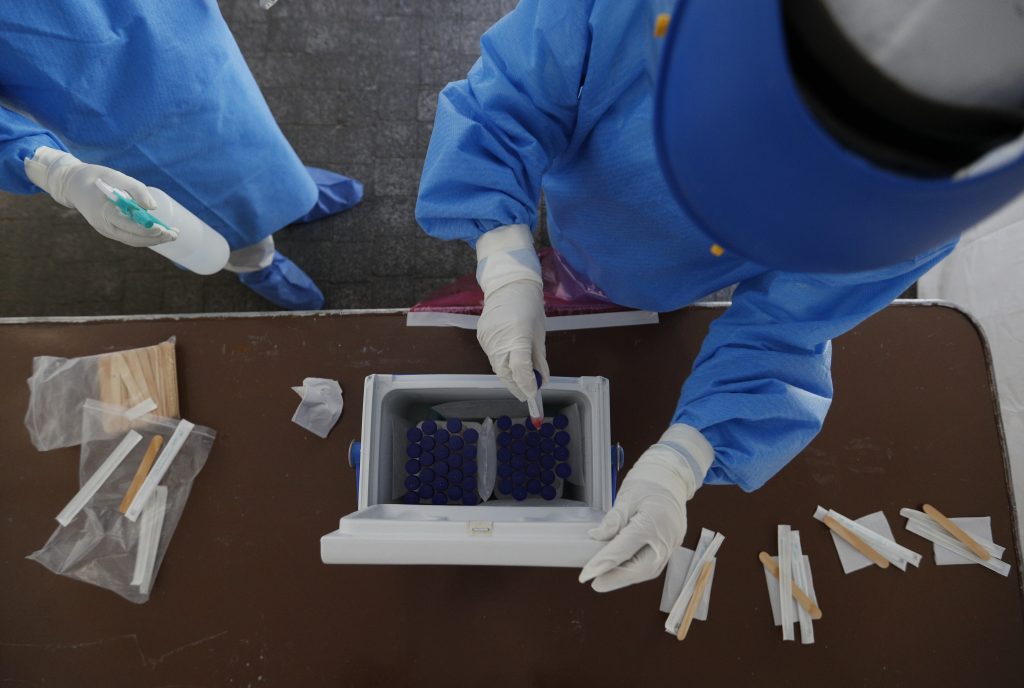 Mexico on Saturday topped one million registered coronavirus cases and nearly 100,000 test-confirmed deaths, though officials agree the number is probably much higher.

How did Mexico get here? By marching resolutely, even defiantly, against many internationally accepted practices in pandemic management, from face mask wearing, to lockdowns, testing and contact tracing.

What is more, officials in Mexico claim science is on their side. Assistant Health Secretary Hugo López-Gatell says any wider testing would be “a waste of time, effort and money.” Face masks, López-Gatell says, “are an auxiliary measure to prevent spreading the virus. They do not protect us, but they are useful for protecting other people.”

Except science does not appear to be on their side. International experts have recommended mass testing, and say face masks protect both the wearer and other people.

“They say there is no evidence. No, excuse me, there is evidence,” said former health secretary Dr. José Narro. “In May, we already began to have empirical evidence and well-documented scientific studies began to appear stressing the importance of face masks and the need for testing.”

“What I can say is the [government] strategy did not have the necessary flexibility to adjust to the increasing amount of knowledge” about the disease, Narro said.

In part that has been a hallmark of López Obrador’s administration: never back down, never change course, and if challenged, double down.

His main promise to Mexicans is that there would be enough hospital beds for everyone who needs one, and his government has largely fulfilled that basic promise — even if Mexicans are so afraid of those hospitals they often wait until the last moment to go for treatment, at which point, doctors say, it’s often too late. That fear was not unfounded; early in the pandemic, three-quarters of patients intubated and put on ventilators in Mexico’s largest hospital network died.

To its credit, that is one of the few areas where the government’s public message has changed: where officials once urged people with the disease to stay home as long as possible, they now advise those over 60 or with risk factors like diabetes or obesity to seek treatment immediately.

But on most other points, the insistence that the rest of the world is wrong and Mexico’s approach is right appears to have taken a toll in lives.

Since the pandemic began, Mexico has managed to administer only about 2.5 million tests to its citizens; only seriously ill people get tested in Mexico. Testing only 1.9% of the population since the pandemic began has made it hard, if not impossible, to effectively trace contacts, catch outbreaks early or identify asymptomatic cases.

Even in Mexico City, one of the few places that has paid lip-service to trying to identify cases before they get to a hospital, the efforts have been incredibly weak.

To be fair, few countries have managed to do contact tracing well; Mexico, with fewer financial resources and where half the population is poor, self-employed or working off the books, there was little chance of strict control or surveillance.

Mexico City has tried an alternative approach, which is to identify neighborhoods where clusters of cases have occurred, and give them special attention. Lurid yellow warning posters reading “Caution! You are entering an area of high infection” now dot the city. Special kiosks are set up in such neighborhoods to provide some tests, and a few health workers have gone door-to-door looking for cases. But that is rare.

Except for a few states, nobody in Mexico has even attempted to enforce a lockdown, or mask-wearing. The closest thing most local authorities have done has been to force some workplaces to shut down, and fine or close businesses that allow too many customers inside at once. Beyond that — travel, mask wearing, parties, weddings — there is very little enforcement. And as the pandemic stretched into its tenth month, people began to let their guard down.

That has led to super-spreader events like an Oct. 3 wedding in the northern border city of Mexicali. Authorities in Mexico say more than 100 people are believed to have been infected by the coronavirus at the wedding, which about 300 people attended.