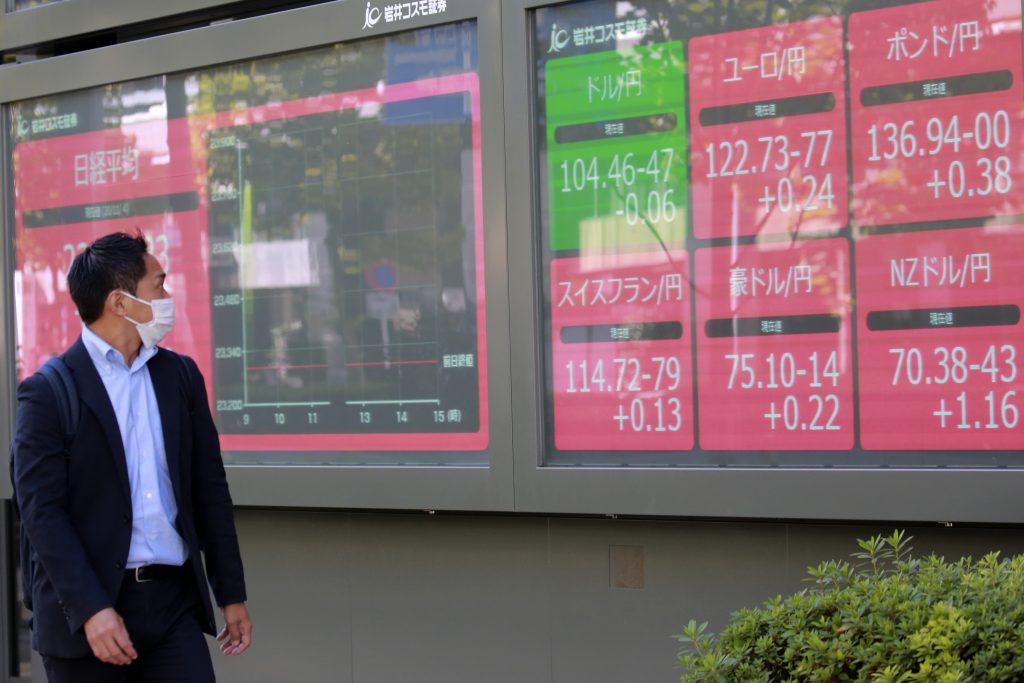 Investors rushed to adjust portfolios for a tighter and later U.S. election result than many had assumed before Wednesday, with pre-poll expectations of a clear Democratic party win in White House and Senate races looking wide off the mark.

Global stocks gyrated in early trade as results from Tuesday’s national vote streamed in, with a final call now seen unlikely for days and the outcome raising the potential for gridlock that complicates the chance of a quick U.S. government spending boost to counter the effects of the pandemic.

Republican President Donald Trump won the battleground of Florida and took the lead over Democratic rival Joe Biden in other U.S. swing states, but Biden voiced confidence he would win the election by taking three key Rust Belt states.

“Markets don’t like ongoing uncertainty, and not knowing the presidential result and a possible dragging out of that over a number of days and that environment looks likely,” said James Athey, investment director at Aberdeen Standard Investments.

European shares opened lower, while MSCI’s global stock index was down after two days of strong gains in anticipation of a decisive victory for Biden and a huge fiscal stimulus.

“It very much looks that whoever wins the White House, we face a divided Congress,” said Stéphane Monier, Chief Investment Officer at Lombard Odier. “This has far-reaching implications for markets, mostly because it means that any kind of pandemic recovery package is still tough to approve. Our portfolios are well balanced to withstand the volatility ahead.”

The U.S. dollar jumped and the yield on the 10-year U.S. Treasury note dipped.

“The U.S. dollar and Treasuries are rallying, which is what you would expect in terms of safety trade,” said Seema Shah, chief strategist, Principal Global Investors, London.

“Markets are waking up to the idea that there is going to be a wave of uncertainty, and market swings are likely as investors work out the implications.”

Betting market odds tightened but still favored Trump after flipping dramatically overnight to favor the president over Biden, according to data from three aggregators.

In addition to the presidency, control of the U.S. Senate was potentially up for grabs in Tuesday’s vote, with Democrats hoping to wrest power from Republicans.

But some investors saw fading chances for Democrats to score a big win in the Senate as Republicans held the line in several contests that had seemed up for grabs.

Markets have been fixated in recent weeks on prospects for a massive fiscal relief stimulus to help the economy recover from the coronavirus pandemic that has killed more than 230,000 Americans.

A “Blue Wave” sweep that sees Biden win and Democrats capture the Senate had captured a lot of investor attention in recent weeks and was seen as the surest path to a massive fiscal package that could support equities and accentuate trends of a weaker dollar and steeper yield curve.

“Some of market moves suggest that some of the more radical Democratic policies that were discussed, which were never clear were going to happen under a blue wave, now seem unlikely,” said David Stubbs, head of markets strategy, JPMorgan International Private Bank in London.

One dramatic move was in Nasdaq 100 index futures, which gained sharply.

Tech shares have been seen as particularly susceptible to selling pressure on fears of rising capital gains taxes if Democrats were to win, as well as on concerns of greater regulatory scrutiny.

The increased chance of a Republican Senate was seen as decreasing the chance of rising capital gains taxes and boosting tech, said Andrew Brenner, head of international fixed income at NatAlliance Securities.

Some investors see a Trump win, which would take tax hikes favored by Biden off the table, as a best-case scenario for the stock market. Ahead of the election, JPMorgan predicted an “orderly” Trump victory as the most favorable outcome for equities.

Since the 2016 election of Trump, who ushered in corporate tax cuts that supported equities but also imposed trade tariffs that led to volatility, the U.S. stock market has gained over 57% and hit new highs.

Investors remain most worried about the race being too close to call or contested for a while.

“Markets can live with either candidate,” said Francois Savary, chief investment officer at Swiss wealth manager Prime Partners. “The scenario they don’t want are legal problems over the outcome and significant political unrest.”