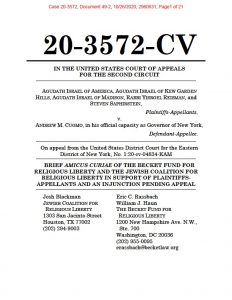 On October 8, 2020, Agudas Yisrael filed a suit in the United States District Court Eastern District of New York, claiming their religious rights were violated when the governor imposed severe restrictions on religious gatherings. This suit was the first of several that were filed against the governor after he imposed the restrictions on “red zones” where the infection rates have risen over the past few weeks.

Agudas Yisrael claimed the restrictions were discriminatory, and they sought immediate relief through a request for Temporary Restraining Order (TRO). Although that request was denied at the time, Agudas Yisrael pursued their case on appeal.

The Becket Fund and The Jewish Coalition are currently representing another group of religious Jews who are seeking to have the restrictions overturned, and are seeking monetary compensation for damages they are claiming as a result of the governor’s order.

The Amicus Curiae brief, also called a “friend of the court brief,” seeks as a third party to provide information to the court. In this brief, they clarify why they feel the court erred in not providing the TRO and recommends the court enjoin the governor’s Executive Order pending the appeal of the original case brought by Agudas Yisrael.

On Tuesday, October 28, 2020, three additional briefs were filed in the suit. Torah Umesorah, the National Society for Hebrew Day Schools, filed an additional Amicus, claiming that the restrictions on the houses of worship have hampered their religious educational institutions, and restricts their ability to practice their faith. Through their brief, they expect “to ensure that courts will not blindly defer to government restrictions that burden their ability to pass on their faith, but will instead apply the proper level of constitutional scrutiny.”

The purpose of the new brief was “to increase the Court’s understanding of the ways in which religious minorities have historically been scapegoated in times of fear and uncertainty” and to “highlight the way that New York’s policy fits into that troubling pattern.”

The Center for Constitutional Jurisprudence, the public interest law arm of the Claremont Institute of the Dale E. Fowler School of
Law  at Chapman University in Orange, California, filed another Amicus Curiae, arguing that Jacobson v. Massachusetts, one of the cases the courts have cited in allowing states to limit religious activities during the pandemic, has been misread and applied incorrectly, and the court should not use it as precedent to allow states to restrict religious activity during the current health crises.